Discovery of an unusual protein 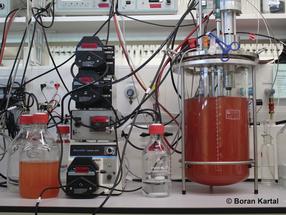 One of the bioreactors that Kartal and his colleagues used to grow cells of K. stuttgartiensis in the lab.

Scientists from Bremen discover an unusual protein playing a significant role in the Earth’s nitrogen cycle. The novel heme-containing cytochrome is involved in the anammox process, which is responsible for producing half of the dinitrogen gas in the atmosphere and important in greenhouse gas regulation.

Nitrogen is an essential component of life. For example, it is required for the production of proteins. Boran Kartal, head of the Microbial Physiology group at the Max Planck Institute for Marine Microbiology in Bremen, studies nitrogen-cycling microorganisms, which control the bioavailability of this vital resource. A particularly interesting part of the nitrogen cycle is the anammox process, short for anaerobic ammonium oxidation. Here, nitrite or nitric oxide and ammonium are converted directly into dinitrogen gas. Now Kartal and his colleagues discovered a protein involved in the anammox process that might have some surprises.

Too unusual to be noticed up to now

This protein, a heme-containing cytochrome, is involved in the conversion of ammonium and nitric oxide to hydrazine. “Heme proteins have profound functions in life, like hemoglobin in our blood that carries oxygen. Heme structures in general resemble a spider web with an iron atom sitting in its center. Throughout the tree of life, we can recognize where this spider web binds to the rest of a protein from a pattern typically formed by five amino acids,” Kartal explains. “Surprisingly, the protein we discovered has a very unusual and unexpected structure. It forms this pattern with only four amino acids, and was therefore overlooked in studies up to now.”

The new protein is in the center of a very exciting and relevant process. Anammox bacteria produce only atmospheric nitrogen (N2) from nitrite or nitric oxide (NO) and ammonium, as Kartal previously showed. Unlike many microorganisms, they do not convert nitric oxide to the greenhouse gas nitrous oxide (N2O). Consequently, each molecule of NO that is transformed into N2 instead of N2O is one less molecule adding to climate change. Anammox bacteria reduce the amount of NO available for N2O production, and therefore, the amount of released greenhouse gas.

This relevance in mind, Kartal and his colleagues carried out a database search to investigate how widespread proteins with the newly discovered pattern are in nature. “Remarkably, this pattern is very common,” says Kartal. Proteins with the four-amino-acid pattern are present in a large variety of microorganisms throughout the bacterial and archaeal domains. “It is found in many different groups of microorganisms such as methanotrophs, that live on methane, and metal degraders,” Kartal continues.

The full potential of proteins with the four-amino-acid pattern is completely unexplored. “In the anammox bacteria, it is found in a protein that shuttles electrons.” Kartal says, “In other organisms this pattern might confer special properties to the proteins it is in. This is definitely something to investigate further.”