Key to rubustness of plants discovered 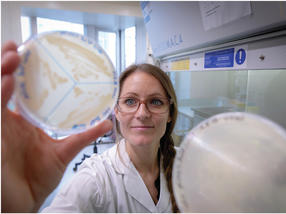 Scientist in the laboratory

In every weather situation, plants need to be robust and flexible at the same time. These structural properties come from its cell wall: It’s responsible to keep the plant in shape, to compensate its osmotic pressure and to protect it against pathogens e.g. bacteria, viruses or fungal attacks. The cell walls of plants are largely built from polymers and – the polysaccharide – cellulose. As a linking agent, polysaccharides have the important task to connect long-chain polymers and to build a molecular network of tiny strands, called fibrils. Those contribute to the tensile strenght of the plant.One of the sugar building blocks is the branched-chain monosaccharid Apiose, derived from the latin word „Apium“, a plant genus, to which celeriac and parsley are part of.

„Apiose is preoccupying the Plant Biochemical Research for more than a hundred years, since its function in plants has not yet been fully understood. Besides, the mechanism, which is responsible for the production of Apiose in nature, was still not known“, tells Bernd Nidetzky, CSO of the Austrian Centre of Industrial Biotechnology (acib) and Director of the Institute of Biotechnology and Bioprocestechnology at the Technical University of Graz, Austria.

acib and TU Graz together with the Universities Pavia (Italy) and Barcelona (Spain) discovered how Apiose is produced by a single enzyme called UAXS(UDP-apiose/UDP-xylose Synthase). For the first time, the scientists were able to decode the entire mechanism of this enzyme. The groundbreaking discoveries were published in the journal Nature Catalysis. „Isolated from the cress Arabidopsis thaliana, the catalyst possesses special properties: Whereas most biosynthetic processes for the manufacturing of complex molecules need several reaction steps, the UAXS-enzyme selectively catalyzes four reaction steps“, Nidetzky reveals. By doing so, the enzyme is able to break down organic carbon compounds as well as to establish new molecular compounds. This results in the change from an six ring sugar molecule (Hexose) to a structural converted five ring sugar (Pentose). By creating new organic carbon compounds, the enzyme is responsible for giving plants their strenght properties.

The elucidation of the encymatic mechanism of Adipose was able due to the interdisciplinary collaboration from the research areas enyzmology and biocatalysis, structural biology and molecular modelling.

New insights in the capabilities and uses of enzymes

The unusual and highly complex reaction sequence of Apiose biosynthesis enables the enymologists new, fascination insights into the molecular evolution of higher plants and gives information about how certain enzymes are able to coordinate multi step processes, leading to a final product. Nidetzky: „By understanding the biogenesis of the carbohydrate Apiose in plants grants us the basis for future industrial applications, for instance the production of valuable sugar molecules for possible products e.g. fine chemicals or novel biopharmaceuticals.“