How oxygen destroys the core of important enzymes 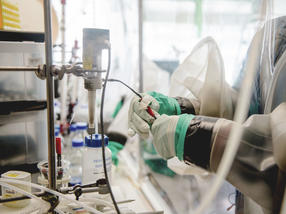 Hydrogenases are very sensitive to oxygen. Thus, experiments with the enzymes have to take place in a sealed environment.

New findings are expected to help protect the hydrogen-producing enzymes from harmful oxygen – which is interesting for biotechnological applications.

Certain enzymes, such as hydrogen-producing hydrogenases, are unstable in the presence of oxygen. Researchers at Ruhr-Universität Bochum (RUB) have identified the reasons on the atomic level.

The experiments were carried out jointly by three RUB groups: the photobiotechnology research group was represented by Dr. Julian Esselborn – today at the University of California, San Diego –, Professor Thomas Happe and Dr. Leonie Kertess. The team collaborated with Professor Eckhard Hofmann from the Protein Crystallography Group and Dr. Ulf-Peter Apfel from the Chair of Inorganic Chemistry I.

The interdisciplinary cooperation at the interface between biology, chemistry and physics was embedded in the Ruhr Explores Solvation Cluster of Excellence, Resolv for short, and the Research Training Group Microbial Substrate Conversion, Micon for short.

Structural changes due to oxygen

The researchers analysed a hydrogenase from the bacterium Clostridium pasteurianum. The unique aspect about this class of enzymes is that their structure consists of six iron and six sulphur atoms. The so-called cofactor constitutes the core of the protein, where the actual hydrogen production takes place.

The researchers stored several samples of the enzyme with oxygen for different lengths of time. They then used X-ray structure analysis to study how the three-dimensional structure of the proteins had changed. “This method is very complex and complicated, but it helped us trace the destructive process on an atomic level,” says Julian Esselborn.

Incubation with oxygen only altered individual atoms of the enzyme, namely certain iron atoms of the cofactor. This gradually led to the disintegration of the entire active centre. By understanding which iron atoms are particularly affected, the researchers hope to be able to better protect biotechnologically interesting proteins against oxygen in future.