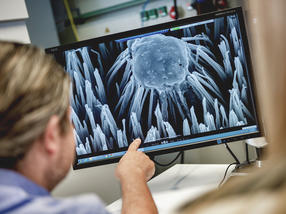 Scanning electron microscopy can be used to analyse the interaction between biological objects such as cells and bacteria and nano-structured surfaces.

Nano columns on the surfaces of implants prevent bacteria from reproducing there. They are grown by a team of material scientists.

Thousands of patients are forced to undergo surgery and antibiotic therapy because their implants were colonised by germs. A team of medicine and material scientists at Ruhr-Universität Bochum (RUB) has found a way to prevent bacteria from attaching themselves to implants such as artificial joints: they make columns in the nanometre range grow on the surfaces, which tear the bacteria apart – pretty much like a bed of nails. Germs that are too resistant are tackled with silver ions.

The researchers were inspired by structures occurring on the wings of certain cicada, which boast antibacterial properties: The wings are covered in tiny columns from a wax-like material that are only approximately 200 nanometres in size and cause damage to bacterial cell wall. “Previously, scientists assumed that bacteria in nature were primarily eliminated through chemical processes,” explains Manfred Köller.

Coating surfaces with nanostructures is what Professor Alfred Ludwig’s Chair of Materials Discovery and Interfaces specialises in. It houses a so-called sputtering system that was used to generate an almost identical metal replica of the nano-column structure occurring in cicada.

Nadine Ziegler is conducting her PhD project in this field. She uses a specific sputtering technique called glancing angle deposition (GLAD). “In the process, individual titanium atoms are released from a pure titanium disc and accelerated in the direction of the substrate. They hit it diagonally from the side,” she explains. Thus, a landscape of characteristic titanium-atom nano columns is created. Tests with Escherichia coli bacteria have shown that pathogens are unable to reproduce on surfaces coated like that.

However, other types of bacteria with a thicker cell wall, such as staphylococci, remained unimpressed. In order to stop them from attaching themselves, the researchers developed a coating technique using nano columns with even smaller silver and platinum nano spots. As silver corrodes in the presence of the nobler platinum, silver ions are released and damage bacteria. “Because silver disappears within three days due to corrosion, what we have here is a self-limiting system that is supposed to prevent infections in the sensitive phase after surgery,” concludes the researcher.