Chemists show it's hip to be square 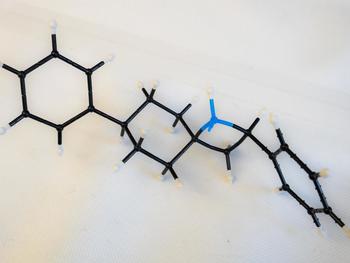 A model shows an exposed blue nitrogen in a four-member ring, the active part of an azetidine molecule. Rice University scientists synthesized the molecule to simplify the process of drug design. 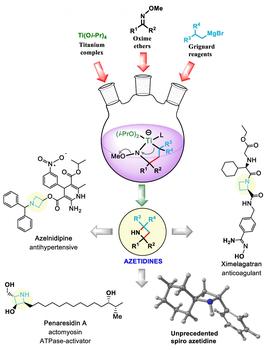 Rice University chemists want to make a point: Nitrogen atoms are for squares.

The nitrogens are the point. The squares are the frames that carry them. These molecules are called azetidines, and they can be used as building blocks in drug design.

The Rice lab of chemist László Kürti introduced its azetidines in an Angewandte Chemie paper. The lab's goal is to establish a library of scaffolds for pharmaceutical design through the simple synthesis of a class of molecules that were previously hard to find in nature and very hard to copy.

Azetidines already appear in several drugs and are promising components in the development of treatments for neurological diseases like Parkinson's disease, Tourette's syndrome and attention deficit disorder, according to the researchers.

So there's value in making a fast, inexpensive synthetic route to azetidines with unprotected nitrogen atoms called NH-azetidines -- NH for nitrogen and hydrogen -- that were first found in several kinds of Pacific sea sponges and have more recently been made in arduous laboratory processes.

Rice graduate students Nicole Behnke and Kaitlyn Lovato, lead authors of the paper, quickly learned why there are so few references to synthetic NH-azetidines in the scientific literature.

It required more than 250 experiments for the students to optimize their process, which takes about 24 hours, including product purification. Azetidine molecules come in many configurations, but they all share the square motif, a four-atom "ring" that contains one nitrogen atom and three carbon atoms. This ring is heterocyclic -- that is, it contains at least two different elements.

Kürti noted the square ring is always connected to another ring via one shared carbon atom, a structure called a spiro azetidine. In this way, the two rings are perpendicular to each other, further isolating the highly reactive nitrogen for access by chemists. The nitrogen in the Rice lab's variations were often, though not always, paired with a hydrogen atom "cap" that still allows the nitrogen to react with outside agents.

"Dr. Kürti was inspired by the mechanism of a synthetic process called the Kulinkovich reaction, which is used to make three-membered all-carbon rings, called cyclopropanes, that have the heteroatom (the nitrogen or oxygen) on the outside," Lovato said.

"Once we started looking into making four-membered azetidines, we found that most of them didn't have the NH structures," she said. "The known synthetic methods predominantly yield azetidines in which the ring nitrogen atom is connected to a carbon outside of the ring, but the NH connectivity was hard to access directly. If there's a carbon there, the nitrogen is considered protected, but having the hydrogen there leaves it free to engage in further reactions."

"Once you make this NH heterocycle, you have the flexibility to put whatever you want on the nitrogen," Kürti said. "Or to leave it as it is."

A titanium reagent turned out to be a key middleman in the chemical reaction, allowing it to proceed quickly. "This metal complex mediates the overall transformation, and it's very good because titanium is non-toxic and very abundant," he said.

"It's commercially available and cheap," Behnke said. "If we don't have the titanium added to the flask, the reaction doesn't work."

The Rice team did not patent the process, Kürti said. "The reality is that synthetic organic chemists in academia can contribute a lot to biomedical sciences and pharmaceutical drug discovery when we develop a new mechanism or reaction," he said.

"Biotech and pharmaceutical companies can use the products of these reactions to build structurally diverse compound libraries and quickly test them for biological activities towards different cancer cell lines, pathogens or other important disease biochemical pathways they have assays for," Kürti said. "Once they have access to novel core structures like these spiro azetidines, it's up to medical chemists to decide what diverse functionalities they wish to add on."