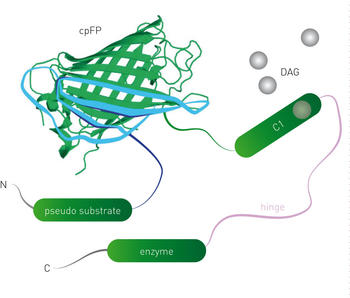 Diagram of the DAG sensor

Due to their role in signal transmission from the outside to the inside of a cell, G-protein coupled receptors are prominent drug targets. Signaling from a stimulated Gq-coupled receptor activates Phospholipase C (PLC) and results in production of the second messengers PIP2, DAG and finally in the release of Ca2+.

Montana Molecular developed genetically encoded biosensors that decrease (downward) or increase (upward) fluorescence in presence of the specific Gq associated second messengers. They are available in red and green to enable multiplexing.

The sensors were expressed in HEK293 cells and the acetylcholine receptor was activated by Carbachol. Generation of DAG, PIP2 and Ca2+ was reliably reported by the biosensors and the CLARIOstar® proved a suitable detector: filter-based and monochromator-based measurements were sensitive and fast enough to detect changes of up to two second messengers upon carbachol injection in one well, necessary for unambiguous identification of Gq signaling.

Facts, background information, dossiers
More about BMG Labtech
Most read white papers
other
Topics A-Z
All topics
Get in Touch with the Supplier Now: Download Whitepaper