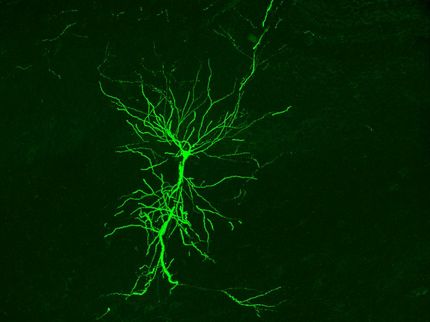 In 2019 NanoBright began, an ambitious project that proposed the use of light to diagnose brain tumors and lesions, among other pathologies. As a result of this work, a novel probe has been developed that uses nanostructures to channel light signals through brain tissue. This new technology, chosen as the cover story of Advanced Optical Materials, could be a breakthrough for the study and treatment of brain tumors and neurodegenerative diseases such as Alzheimer's disease.

The new technology consists of an optical fiber, with a diameter smaller than that of a human hair, inside which there are so-called plasmonic structures. These are metallic nanostructures that can be adjusted to respond to a light stimulus traveling through the fiber. The size of the plasmonic structures is similar to that of neuronal bodies, a fundamental aspect of the design in which the collaboration of the CSIC team has been essential. The device directs the light precisely and generates a physical interaction with the cells to observe their properties.

"It is an optical fiber modified to send and receive light. The probe can illuminate brain tissue molecules and amplify the light they reflect, generating spectral patterns depending on the properties of each type of molecule," explains CSIC Cajal Institute researcher Liset Menéndez de la Prida, director of the neuroscientific application of the project and an expert in the study of epilepsy.

According to CNIO researcher Manuel Valiente, who coordinates the application of this technology in the study of cancer: "This first work by Nanobright confirms that we can technically move on to the second stage to test these preparations in experimental models of cancer, and in the future improve the ability to diagnose and treat brain tumors".

The Brain Metastasis Group led by Valiente at the CNIO will investigate the use of this new technology to discriminate between primary and metastatic brain tumors, which are treated very differently; as well as the use of light generation to permeabilize the blood-brain barrier, thus favoring access to the brain for anti-tumor drugs.

The modification of brain tissues in metastasis or cranioencephalic trauma leads to an alteration in their molecular composition. The same occurs in the case of aging or Alzheimer's disease, with the consequent variation in the composition of brain lipids. Thus, the technique will be able to characterize the altered tissues by measuring the different proportion of substances such as the aforementioned lipids or proteins, among others.

The neuronal probes developed by the group are also minimally invasive. Other techniques that use light to study the brain, such as optogenetic techniques, require modifications at the genetic level for the expression of proteins that allow them to function correctly. The new technology involves a biocompatible application of light that merely excites molecules already present in the tissue.

The research thus lays the foundation for a new approach to the study of the central nervous system and the molecular causes of neurological disorders. The scientists are now focused on the next phase of the project. "We have done some initial tests on fixed tissue. We are now embarking on systematizing the testing in experimental models relevant to clinical applicability, such as brain metastasis, post-traumatic epilepsy and aging," explain Menéndez de la Prida and Valiente.

The project has been funded by the European Commission with some 3.5 million euros through FET (Future and Emerging Technologies). This is one of the most technologically ambitious funding systems of the European Union, which is focused on projects for the creation of disruptive technologies.

The research is the result of more than 2 years of work by a multidisciplinary team with physicists, nanotechnologists, tumor biologists and neuroscientists with expertise in neuronal disorders. "It is the first probe completed within the consortium. During these years, the technology has been developed and the initial tests have been carried out. It is a success story," says Menéndez de la Prida.

The project was directed by Filippo Pisano and coordinated by Ferruccio Pisanello and Massimo De Vittorio at IIT and the Università del Salento, together with Marco Grande at the Politecnico di Bari.

IIT had previous experience in the creation of optical and photonic interconnections with central nervous tissue and in the field of plasmonic interconnections. Therefore, the Italian center has focused on the technological development of devices that can be implanted and on the optimization of plasmonic structures to detect the nature of tumor tissues.

The Cajal Institute and the CNIO have also collaborated in the design of the fiber through their experience and scientific work, which has served to focus on its possible application in aging, brain tumors, traumatic brain injuries or consequent post-traumatic epilepsy.