Immune cells versus persistent viruses: with a little help from my friends 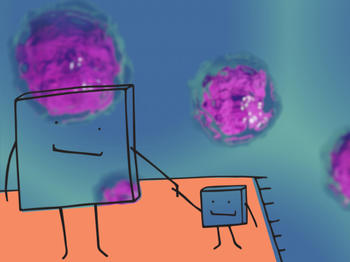 Viruses such as HIV or the pathogen that causes hepatitis C can overwhelm the immune system. One approach to developing vaccines for these chronic infections has until now been aimed exclusively at what are known as the memory B cells, a specific type of immune cells. Researchers at the University of Basel now report that these cells need the help of other memory cells to effectively defend the body against chronic viruses. This is an important finding in vaccine design.

An arsenal of immune cells defends the body against pathogens. During a viral infection, B cells produce antibodies that match the virus and deactivate it. Some of these B cells die off following infection or vaccination. However, some B cells remain in the body as memory cells in order to produce the right antibodies more quickly if a new infection with the same pathogen occurs. Vaccines aim, among other things, to trigger the development of these memory B cells.

However, viruses such as HIV or hepatitis C virus overpower the memory B cells’ defenses – an obstacle in the development of efficient vaccines. In order to overcome this barrier, the research team led by Dr. Daniel Pinschewer from the Department of Biomedicine at the University of Basel is investigating the interplay between immune cells in chronic viral infections.

“One problem is that due to the constant presence of the pathogen and the associated inflammation, the memory B cells go into a sort of panic,” explains Pinschewer. They abandon their routine of proliferation and maturation, and switch to antibody production mode, soon after which they perish. There may now be a remedy for this problem, as the team reports in the specialist journal PNAS.

For their experiments, the researchers studied the infection of mice with a mouse virus named lymphocytic choriomeningitis virus (LCMV), which causes a chronic infection. They noticed that for a sustained response to these viruses, the memory B cells need the help of other immune cells: namely, memory T helper cells, whose formation can also be triggered by appropriate vaccine strategies.

If the researchers induced the production of the appropriate memory T helper cells in the mice before their infection with LCMV, those T cells blocked the panic reaction of the memory B cells after infection. “Instead of exhausting the entire stock of B cells in an unsuccessful battle with the virus, thanks to the memory T helper cells a reserve of B cells remains, which continue to proliferate and mature and maintain the defense against the virus,” says Dr. Kerstin Narr, lead author of the study.

The role of the memory T cells in vaccination against chronic viruses has so far been insufficiently taken into account, according to the team. “The recognition that you can use these cells to promote a more sustained immune response through memory B cells has direct relevance to strategies to develop new vaccines for HIV and hepatitis C,” emphasizes Pinschewer.