Why corona will not disappear and new vaccines will be needed 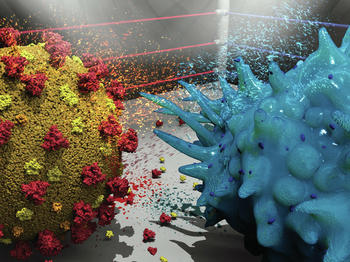 In the boxing ring with coronavirus: the body’s T-cells fend off the intruder.

In a new research project, virologist Andreas Bergthaler is investigating how coronavirus mutations emerge in human hosts. He is seeking an explanation, among other things, for the sudden appearance of greatly mutated variants such as the ones dubbed British and South African. While the expert does not consider it certain that the virus could become more harmless over time, he is confident that the pandemic can be overcome with the existing vaccines.

Coronavirus researchers are confronted with a puzzle. Since the outbreak of the pandemic, it has been known that Sars-CoV-2 will mutate in the course of time. This was to be expected – flu viruses do the same. Until the end of 2020, there were two mutations per month on average. But then highly modified coronavirus variants suddenly emerged. They presented not just one or two new mutations, but up to 30 – enough to reduce the effectiveness of certain vaccines and trigger higher infection rates. Understanding how such mutations in the virus occur has never been more pressing. This issue is now being tackled by a group led by the virologist Andreas Bergthaler in the context of a research project supported by the Austrian Science Fund FWF under its Urgent Funding SARS-CoV-2 call.

“Coronaviruses are RNA viruses,” explains Andreas Bergthaler. “Their copying mechanism is per-se relatively error-prone.” In living cells, RNA is tasked with transporting genetic information stored in DNA to the ribosomes, where protein molecules are produced according to the blueprints they contain. This is the point at which RNA viruses intervene in the process. Since coronaviruses have the largest RNA genomes of all known viruses, they have developed their own correction mechanisms to reduce the error rate. “However, errors or mutations are not necessarily a disadvantage for the virus,” Bergthaler notes. “Quite the contrary, such new mutations allow the virus to adapt to new conditions. When we compare current virus genomes with the reference sequence, i.e. the genetic information from Wuhan from 2019, we see that the virus accumulates about 1 to 2 mutations each month,” explains Bergthaler, principal investigator at the CeMM – the Research Centre for Molecular Medicine of the Austrian Academy of Sciences.

Since the end of December 2020, research groups around the world have been observing a new phenomenon. “We keep coming across new variants that are more strongly mutated, with up to 30 additional mutations at once.” This concerns, for instance, the British variant B 1.1.7 and the South African variant B 1.351. The coronavirus has obviously found a way to mutate faster. Researchers do not yet fully understand whether this is a coincidence or whether there is a common root behind this development, and they have two hypotheses for this phenomenon. “One assumption is that there was an intermediate animal host and that these mutations accumulated there, but there is not a great deal of evidence for that,” says Bergthaler, who has been observing the mutation dynamics of the coronavirus in Austria since the outbreak of the pandemic.

The other hypothesis runs like this: “The viruses could have replicated themselves in individual infected people over a very long period without being controlled by the immune system.” This would have given the virus enough time to build up so many mutations. People with a weakened immune system represent such hosts. “But we don’t feel that this is in itself a sufficient explanation of why so many mutations have accumulated,” Bergthaler notes. “This is one of the questions we intend to answer.”

Hundreds of mutations in one infected person

The new basic research project aims to understand both how mutations accumulate in a single organism and how many of these mutations are passed on to another person through the “bottleneck” of infection. The range of mutations within a single infected person is sometimes significantly higher than that of viruses actually transmitted between people. “Each person can be host to hundreds of virus genomes with small differences,” says Bergthaler. “What is important for us is to be able to detect these low-frequency mutations. We are able to identify mutations that are contained in only one out of 100 genomes within one sample,” Bergthaler explains. Another interesting aspect is the timeline. “If you take samples from particular individuals at multiple times, you can study how the distribution of virus mutations changes,” says Bergthaler.

Finally, the researchers want to investigate how many of the new mutations actually pass through the bottleneck of infection. “For this purpose you need pairs of infected people, where it is ascertained who was infected first and passed it on to the other person. Epidemiological data for this is hard to come by. But if we succeed, we can further investigate how many virus mutations are transmitted to a person at the time of infection,” Bergthaler hopes. By means of bioinformatic methods one can infer how many viruses were actually transmitted between two people.

For these analyses, Bergthaler’s team works closely with Christoph Bock and the Biomedical Sequencing Facility of CeMM, which has been doing most of the whole genome sequencing of Sars-CoV-2 in Austria since the beginning of the pandemic. A bioinformatics team is responsible for data analysis, and the samples come from places such as the Center of Virology at the Medical University of Vienna and the Kaiser Franz Josef Hospital in Vienna’s tenth district.

Virus does not become more harmless

Bergthaler does not share the assumption voiced in a number of places that the virus could become more infectious and less virulent in the course of the mutation process. “In theory it would, of course, be a good evolutionary strategy for a virus to combine maximum infectiousness with minimum harm to the host organism, as is the case with some herpes viruses,” says Bergthaler, but makes reference to the British variant: “Strong evidence shows that this variant is both more infectious and leads to more severe courses of disease and increased mortality.” As vaccination campaigns progress, the virus is subjected to selection pressure. The researcher assumes that new mutations with resistance to certain vaccines may emerge. This makes it all the more important to understand the exact mechanisms.

Bergthaler’s research project, which has just been approved by the FWF, will run for three years. – A long time given the dynamically changing situation. But Bergthaler is confident, and is assuming that if no new dangerous virus mutations emerge, we will have sufficient vaccination coverage after the summer and be over the hill by then. “The virus will still be around in three years, but it can be hoped that by then we will have the second, third or fourth generation of vaccines and will know much more about the basic mechanisms of Covid-19 disease. And with that, harsh measures such as lockdowns should no longer be necessary,” Bergthaler surmises.