The hidden machinery of a photosynthetic giant revealed 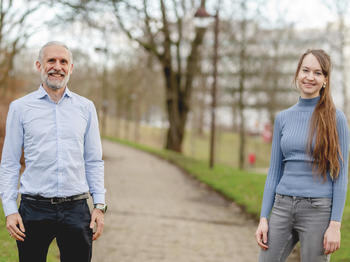 Photosynthesis is the fundament of almost all live on earth, and yet it is not understood down to the last detail. An international research team has now unravelled one of its secrets. The researchers from Ruhr-Universität Bochum (RUB), Osaka University, Japan, and Kafrelsheikh University, Egypt, have successfully isolated a rare manifestation of photosystem I and studied it in detail. The study provided new insights into the transport of light-energy in this giant photosynthetic protein complex.

The power of photosynthesis

Photosynthesis represents the only biological process, which converts the energy of sunlight into chemically stored energy. On molecular level, the photosynthetic key enzymes called photosystems are responsible for this conversion process. Photosystem I (PSI), one of the two photosystems, is a large membrane protein complex that can be present in different forms – as monomers, dimers, trimers or even tetramers.

Although the structure of trimeric PSI from the thermophilic cyanobacterium Thermosynechococcus elongatus was solved 20 years ago, it was not yet possible to obtain the corresponding structure of monomeric PSI. Major bottleneck was the low natural abundance of this specific PSI form. Therefore, a new extraction method was developed by the researchers at RUB, which enabled selective isolation of PSI monomers with high yield. The isolated protein complex was characterized in detail at RUB by mass-spectrometry, spectroscopy and biochemical methods, whereas the research team at Osaka University was able to solve its structure by cryo-electron microscopy.

Teamwork between chlorophylls and lipids might enable uphill energy transfer

The atomic structure of monomeric PSI provides novel insights into the energy transfer inside the protein complex as well as on the localization of so-called red chlorophylls - specially arranged chlorophylls, closely interacting with each other and thus enabling the absorption of low-energy far red light, which normally cannot be used for photosynthesis. Interestingly, the structure revealed that the red chlorophylls seem to interact with lipids of the surrounding membrane. This structural arrangement might indicate that additional thermal energy is used to make far red light accessible for photosynthesis.

The collective research was carried out in the framework of the International Joint Research Promotion Program 824, a cooperation agreement between the Faculty of Biology and Biotechnology at RUB and the Institute of Protein Research (IPR) at Osaka University, established in 2017. The Promotion Program further consolidated the active, long-term collaboration between the Laboratory of Professor Genji Kurisu at IPR and the Bochum project group “Molecular Mechanisms of Photosynthesis” headed by Professor Marc Nowaczyk.

A recently established LabExchange program at the Faculty of Biology and Biotechnology with Osaka University gives RUB students additional possibilities to perform their research projects in the land of the rising sun.