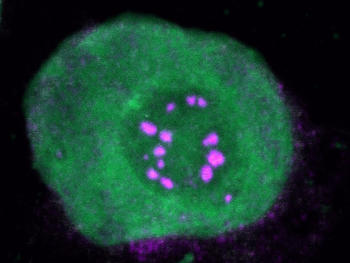 While NUP98-fusion proteins have been shown to cause leukaemia, the molecular mechanisms have so far been unknown. In a recently published study that was led by Vetmeduni Vienna, researchers have now been able to decipher an important part of these mechanisms. According to the study, a possible driver for the activation of leukaemia genes is the very dynamic complex formation of NUP89 fusion proteins with other proteins in a process known as biomolecular condensation. This finding could contribute to the development of more effective and targeted cancer therapies that would be of particular benefit to children suffering from acute myeloid leukaemia (AML).

Cancer-associated chromosomal rearrangements often result in the expression of pathogenic fusion proteins. Leukaemia features a particularly high frequency of fusion oncogenes, and the functional investigation of leukaemia-associated fusion proteins has provided invaluable insights into the molecular mechanisms of cancer development. The protein complexes around fusion proteins play a defining role in shaping oncogenic gene expression patterns, and the investigation of protein interactions is therefore crucial to identifying new targets on the basis of which to develop more effective cancer therapies.

While the most common leukaemia fusion proteins have been extensively characterized, functional understanding of rare fusions that affect a significant number of patients and have limited treatment options is still lacking. In acute myeloid leukaemia (AML), the N-terminal part of the Nucleoporin 98 (NUP98) gene (N-NUP98) is fused to over 30 different C-terminal partner loci. While NUP98 rearrangements are rare (accounting for about 2% of all AML), they are over-represented in paediatric AML, where they are associated with a particularly poor prognosis.

All NUP98-fusion proteins share an intrinsically disordered region (IDR) in the NUP98 N-terminus featuring repeats of phenylalanine-glycine (FG), whereas C-terminal fusion partners often function in gene control. The researchers investigated whether the protein interactomes of NUP98-fusion proteins provided any insights into the mechanisms of oncogenic transformation. “Analyses of affinity purification coupled to mass spectrometry and confocal imaging of five different NUP98-fusion proteins revealed that shared interactors were enriched for proteins involved in biomolecular condensation. These factors colocalized with NUP98-fusion proteins in characteristic condensates in the cell nucleus,” says study director Florian Grebien, Head of the Institute for Medical Biochemistry at the University of Veterinary Medicine Vienna. An artificial FG fusion protein phenocopied the nuclear localization patterns of NUP98-fusion proteins and their capability to drive oncogenic gene expression programmes.

The researchers used a newly developed method called biotinylated isoxazole-mediated condensome mass spectrometry (biCon-MS) to show that NUP98-fusion proteins alter the global composition of biomolecular condensates to drive oncogenic gene expression programmes. “On the basis of the data gathered in this study, we propose that IDR-containing fusion proteins combine biomolecular condensation with transcriptional control to induce cancer,” explains first author Stefan Terlecki-Zaniewicz from the Institute for Medical Biochemistry at Vetmeduni Vienna and St. Anna Kinderkrebsforschung. The alteration of biomolecular condensation could therefore be a fundamental principle of cancer development driven by oncogenic fusion proteins. The researchers believe this could be a new approach to developing more effective and targeted cancer therapies.