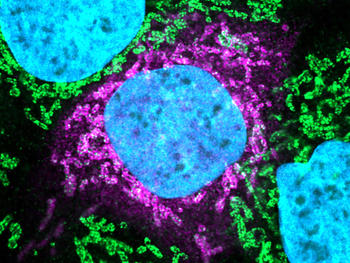 The viral component Orf9b (pink) binds to the host protein TOM70 (green). An international consortium discovered that this molecule at the mitochondria of the infected cells is influenced by the virus. TOM70 plays a part in the cell’s antiviral response.

In search of new drugs against COVID-19, a group of around 200 scientists is uncovering the molecular processes with which the coronaviruses MERS, SARS-CoV1, and SARS-CoV2 manipulate the host cell. The researchers from six countries have found 73 human proteins with which components of all three types of the virus enter into bonds, thus influencing the survival of infected cells in culture. “This systematic atlas offers an outstanding platform for further studies aimed at understanding the process of infection of SARS-CoV2 and other coronaviruses in the cells of the body,” explains Prof. Dr. Robert Grosse, who conducts research at the University of Freiburg’s Cluster of Excellence CIBSS – Centre for Integrative Biological Signalling Studies and is participating in the study with his team. MERS, SARS-CoV1, and SARS-CoV2 all cause severe respiratory diseases in humans.

The Freiburg group used high-resolution fluorescence microscopy to document the areas of the host cell in which the proteins that make up SARS-CoV2 are located during an infection. They succeeded in doing so for a large part of the viral proteins. In the study, which was published in the journal Science, the interdisciplinary consortium points to possible targets for therapeutics and describes a mechanism by which coronaviruses can escape from the immune system.

One of the infected host’s proteins the consortium succeeded in detecting is TOM70, which is located in the mitochondria. Together with the virologists Prof. Dr. Georg Kochs and Sebastian Weigang from the Freiburg University Medical Center, Grosse and the doctoral candidate Svenja Ulferts analyzed infected cells and observed the viral protein Orf9b at the mitochondria. Using biochemical and genetic engineering methods, the laboratory of cooperation partner Prof. Dr. Nevan Krogan from the Quantitative Biosciences Institute (QBI) of the University of California, San Francisco, USA, demonstrated that the viral protein Orf9b does indeed bind to TOM70.

“The really exciting thing is that TOM70 plays a part in the antiviral immune response of the cell,” explains Grosse. It is one of the characteristics of the COVID-19 disease that the viruses manipulate the immune system. However, it is still unclear what molecular processes are responsible for this. Data from the Freiburg group from a publication in July 2020 already showed that SARS-CoV2 causes the host cell to form finger-like structures. “We call them viropodes,” says Grosse, head of the Institute of Experimental and Clinical Pharmacology and Toxicology in Freiburg. To do so, the virus takes over control of the so-called cytoskeleton, which functions as a scaffolding inside the cell, in order to spread better between cells. The scientists are now studying the molecule responsible for this process as a possible drug target.

The consortium also discovered molecules on the cell surface that are influenced by all three coronaviruses and that bind to already approved drugs – a psychopharmaceutical and an anti-inflammatory drug. Through an analysis of the available patient data, the scientists have now found initial indications that people who took these drugs exhibited milder courses of COVID-19. Cooperation partner Dr. Pedro Beltrao from the European Bioinformatics Institute (EMBL-EBI) sees great potential in comparing the different types of the virus in order to find new therapeutics that could be useful for the current pandemic: “But they can also be effective against other coronaviruses that might arise in the future.”

Further institutions that contributed to the study include the Gladstone Institute and the Howard Hughes Medical Institute, USA, and the Institut Pasteur, France.