Nature Unveiling Herself Before Science 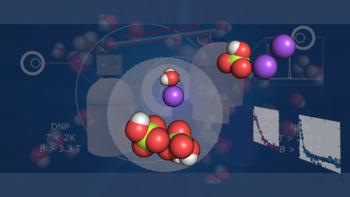 Using D-DNP monitoring, the scientists probed fast interaction kinetics such as those underlying the formation of pre-nucleation species that develop within milliseconds when calcium and phosphate ions meet in solution and that precede non-classical solid-liquid phase separation.

21st century societal challenges such as demographic developments and an ageing population demand for new functional materials, such as for bone prostheses. Nature often serves as inspiration when designing these materials. In a recent study published in Analytical Chemistry, a team led by ERC awardee Dennis Kurzbach of the Faculty of Chemistry at the University of Vienna reports an innovative approach for high-resolution real-time monitoring of calcium phosphate mineralisation, which is an important natural process for the formation of, e.g., bone, carapace and teeth. They showed how next generation NMR technology allows to create new knowledge about the efficiency of natural materials.

"Nature unveiling herself before science" is a sculpture by Louis-Ernest Barrias on display at the Musée d'Orsay in Paris. A research collaboration of the University of Vienna and the Sorbonne in Paris now took this credo to heart. “In order to create efficient functional materials, nature offers the best recipes by providing evolutionarily successful concepts,” says Dennis Kurzbach from the Institute of Biological Chemistry. Kurzbach and his colleagues applied a jointly developed technology, based on NMR spectroscopy, to reveal the secrets of biomineralisation.

NMR (nuclear magnetic resonance) is an important method to determine the structures of molecules in solution, albeit limited resolution. In order to facilitate real-time monitoring of rapid chemical processes, Dennis Kurzbach and his team developed a new prototype that, based on hyperpolarisation (more specifically Dissolution Dynamic Nuclear Polarisation, D-DNP), provides the scientists with up to 10,000-fold amplified signals in NMR experiments.

With this D-DNP prototype, the scientists can monitor processes taking place on the milliseconds timescale, while at the same time single atoms can be resolved. The prototype encompasses an already patented system to mix various interaction partners within milliseconds and to initiate real-time detection.

Precipitation of ionic solids from solution

Dennis Kurzbach, an expert in methods development, started the proof-of-concept with his Parisian colleague Thierry Azaïs, who was interested in a better understanding of the initial steps of biomineralisation. Using D-DNP monitoring, the scientists probed fast interaction kinetics such as those underlying the formation of pre-nucleation species that develop within milliseconds when calcium and phosphate ions meet in solution and that precede non-classical solid-liquid phase separation. “For the first time, we were able to analytically characterise these pre-nucleation species at high resolution,” Kurzbach explains, who has established the cutting-edge technology in the NMR Core Facility of the Faculty of Chemistry within the framework of his ERC Starting Grant.

With their new insights and technology, the researchers are also contributing material to a long-lasting dispute about the theory behind the biomineralisation of calcium phosphate. “Some researchers doubt that the pre-nucleation species can be integrated into the classical theoretical framework developed over decades,” says Dennis Kurzbach.

The researcher’s study also provides a kick-off for a recently granted project funded by the Austrian Science Fund FWF, in which Kurzbach intends to use his technology to advance the characterisation of biominerals as well as of the initial chemical processes before nucleation. For example, he aims at clarifying whether the size of the newly discovered species is controllable and if so, whether it is possible to engineer future hardness or brittleness of the macroscopic material.

"Moreover, it will be interesting to see whether we can help to solve the current theoretical shortcomings," Kurzbach says, who graduated not only in chemistry, but also in philosophy. “For me, our research goals are also strongly reflected by Aristoteles' ideas: All human beings strive by nature after knowledge.” The D-DNP technology now makes it possible to deepen our knowledge of the nature of the materials, which provides important properties to people and society.