Nanocontainers introduced into the nucleus of living cells 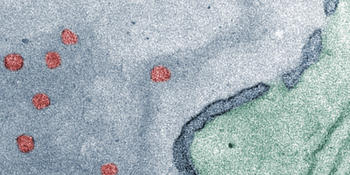 To enter into the cell nucleus (grey), the polymersomes (red) must selectively translocate across the nuclear membrane (dark blue) via the nuclear pore complexes (gaps in the membrane).

An interdisciplinary team from the University of Basel has succeeded in creating a direct path for artificial nanocontainers to enter into the nucleus of living cells. To this end, they produced biocompatible polymer vesicles that can pass through the pores that decorate the membrane of the cell nucleus. In this way, it might be possible to transport drugs directly into the cell’s control center.

In order to combat diseases, different therapies strive to intervene in pathological processes that occur in the cell nucleus. Chemotherapies, for example, target biochemical reactions that are involved in the proliferation of cancer cells, while the objective of gene therapies is to insert a desired gene into the nucleus. Therefore, a challenge in the field of nanomedicine is to develop a reliable method of introducing active substances specifically into the cell nucleus.

Researchers at the University of Basel have now developed tiny nanocontainers that do just that in living cells. These nanocontainers can pass through the nuclear pore complexes that control the transport of molecules into and out of the cell nucleus. The development of these so-called polymersomes involved a highly interdisciplinary team of scientists from the Swiss Nanoscience Institute, the Biozentrum and the Department of Chemistry.

Entry ticket into the nucleus

Researchers used a trick to direct the artificial nanocontainers through the nuclear pore complexes: “These polymersomes, which are about 60 nanometers in size, are encapsulated by a flexible polymer membrane that mimics natural membranes,” explains chemist Professor Cornelia Palivan. “However, they are more robust than lipid vesicles and can be functionalized as needed.”

In addition, the researchers constructed the polymersomes with nuclear localization signals bound to them – giving them an entry ticket into the nucleus, so to speak. Cells use these signals to differentiate between molecules that need to be transported into the nucleus and those that should be kept out. In this way, the nuclear localization signals are used to disguise the artificial nanocontainers as permissible cargo.

“The presence of nuclear localization signals enables the polymersomes to hijack the cellular transport machinery that delivers cargo through the nuclear pore complexes,” explains Professor Roderick Lim. This property is similarly based on nature: “This strategy is also used by some viruses,” said the biophysicist.

The researchers were able to track the path of the polymersomes into the cell nucleus by filling them with different dyes and observing them using various microscopic techniques. This confirmed the successful transport of the artificial nanocontainers into the cell nucleus in vitro as well as in vivo within living cells. For future investigations, these dyes will be replaced by therapeutic agents.

“These findings show that the polymersomes we have developed make it possible to deliver artificial cargo very specifically into the cell nucleus. Indeed, nanocontainers without nuclear localization signals could not be detected in the cell nucleus,” according to first author Christina Zelmer, summarizing the study.