How Cells Assemble Their Skeleton

Researchers study the formation of microtubules 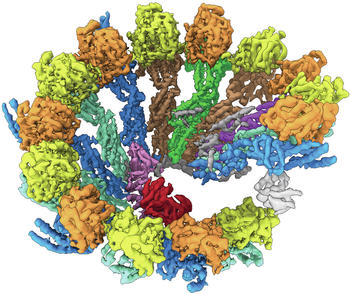 Cryo-EM structure of the γ-TuRC spiral. The components of the complex were coloured differently

Microtubules, filamentous structures within the cell, are required for many important processes, including cell division and intracellular transport. A research team led by scientists from Heidelberg University recently discovered how the spiral-shaped, modular microtubules are formed and how their formation is controlled. These processes were visualised using state-of-the-art cryo-electron microscopy (cryo-EM).

“To assemble microtubules from their individual components, the cells use structural templates that mimic one layer of the microtubule helix and can serve as a starting point for the newly forming microtubules,” explains Dr Stefan Pfeffer, junior research group leader at the Center for Molecular Biology of Heidelberg University (ZMBH). In human cells, the gamma-tubulin ring complex (γ-TuRC) serves as such a structural template. To more accurately understand how it influences the formation of microtubules, the scientists used cryo-EM for determining the structure of the γ-TuRC at molecular resolution. The study elucidates in detail how the γ-TuRC is structurally organised and how its approximately 30 different subunits are assembled. It also clarifies how the formation of microtubules on γ-TuRC can be quickly regulated by a simple change in the ring diameter.

“The activation of γ-TuRC in particular is essential for efficient and reliable division of the genetic material during cell division. Because the number of microtubules in cancer cells is changed, contributing to the aggressiveness of tumours, these findings are also significant for cancer research,” adds Prof. Dr Elmar Schiebel, ZMBH research group leader who, together with Dr Pfeffer, is a corresponding author of the study. As a next step, the scientists plan on finding drugs that can be used to block the microtubule nucleating activity of γ-TuRC. The goal would be to establish a new mode of action for inhibiting cell division, which the scientists believe could be used in tumour therapy.