RNA modification: Methylation and mopping up 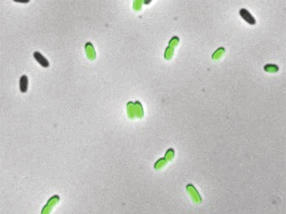 In the rod-shaped bacterium Escherichia coli, Kellner and her colleagues have now identified a previously unknown modification in RNA.

LMU researchers have discovered a novel type of chemical modification in bacterial RNAs. The modification is apparently attached to molecules only when cells are under stress, and is rapidly removed during recovery.

Ribonucleic acid (RNA) is chemically closely related to the DNA that serves as the carrier of hereditary information in all cells. Indeed, RNA itself plays a central role in the process that converts the genetic messages into proteins, which catalyze chemical transformations and serve as structural elements in cells and organisms. Like DNA, RNA molecules are made up of sequences of four different types of subunits called nucleobases, which are connected to each other by means of sugar-phosphate links. In all organisms, these subunits can be selectively modified in order to regulate their interactions and functions. Now Dr. Stefanie Kellner, who heads an Emmy Noether Junior Research Group in the Department of Chemistry, in cooperation with Kirsten Jung (Professor of Microbiology at LMU), has identified a novel – and biochemically rather unusual – modification in bacterial RNAs. The modification is attached when microorganisms are subjected to stress, and can be promptly removed when conditions return to normal.

Both DNA and RNA can be modified by methylation, i.e. the attachment of methyl (CH3) substituents to nucleotides. In addition, bacteria modify RNAs with functional groups that contain sulfur atoms as a means of regulating protein synthesis. One such modification replaces the oxygen at position 2 in the cytidine base. In the rod-shaped bacterium Escherichia coli, Kellner and her colleagues have now identified a previously unknown form of this modified sulfur-containing base. “In this case, the bacteria are methylated at the sulfur of cytidine,” says Kellner. “Coupling via a sulfur substituent converts the cytidine into a 2-methylthiocytidine, or ms2C for short.”

Further experiments revealed that ms2C appears in RNA mainly when the bacteria are placed under stress, by the addition of deleterious chemicals or antibiotics to the growth medium. Although the damage negatively impacts protein translation, it is not a death sentence to the bacteria.

Interestingly, the bacterium possesses an enzyme that can subsequently remove the methylation damage. The team succeeded in characterizing the repair mechanism directly with the aid of a relatively new analytical technique called NAIL-MS (Nucleic Acid Isotope Labeling coupled Mass Spectrometry). This involves labeling of the sample with a heavy isotope prior to analysis by high-sensitivity mass spectrometry, which enables one to follow the fate of the modified RNAs after the stressor has been removed. “In this way, we were able to show, in living cells, that the modified RNA is not degraded. Instead, it is repaired by enzymatic detachment of the methyl group,” as Kellner explains.

Since the repair process is completed within 1-2 hours after modification of the RNA, the researchers believe that the cell is already ‘prepared’ to deal with the damage. It is conceivable that the sulfur-containing RNA bases act as scavengers of free methyl groups that are produced as a direct result of stress, thus preventing them from modifying the DNA or other proteins. Since bacterial cells are full of RNA molecules, these could function as an efficient detoxification mechanism to mop up reactive chemical groups.