A Simple Guide to Neurotransmitters 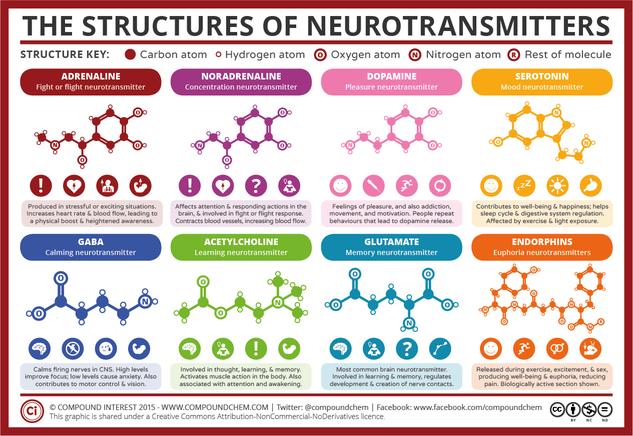 A Simple Guide to Neurotransmitters

Adrenaline, also known as epinephrine, is a hormone produced in high stress or exciting situations.

Noradrenaline, also known as norepinephrine, is a neurotransmitter that affects attention & and responding actions in the brain.

Dopamine is associated with feelings of pleasure & satisfaction.

Serotonin is thought to be a contributor to feelings of well-being and happiness.

Gamma-aminobutyric acid (GABA) is the major inhibitory neurotransmitter of the brain; its role is to calm firing nerves in the central nervous system.

Acetylcholine, often shortened to ACh, is the principal neurotransmitter involved in thought, learning and memory.

Glutamate is the most common neurotransmitter in the brain, and is involved in cognitive functions, such as learning and memory.

Endorphins are released in the brain during exercise, excitement, pain, and sexual activity, and produce a feeling of well-being or even euphoria.