The Chemistry of Raspberries 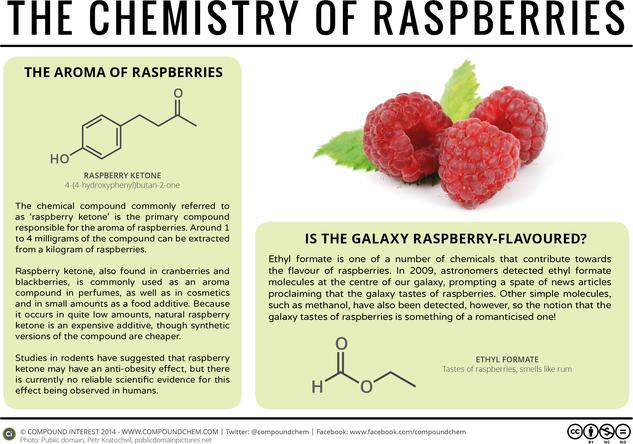 Raspberries, like all fruits, contain a complex mix of organic compounds. Unlike many fruits, however, raspberries have the less common distinction of lending their name to the compound that is a major contributor to their aroma – and one of the compounds that contributes to their flavour has also been detected in the centre of our galaxy. So, does the centre of the galaxy taste faintly of raspberries?

Before we examine that, let’s start by looking at the aroma of raspberries. A number of families of chemical compounds contribute toward the smell of raspberries, primarily terpenoids, aldehydes & ketones. However, it’s a compound known as ‘raspberry ketone’ (which has the chemical name 4-(4-hydroxyphenyl)butan-2-one)) that is considered the ‘impact molecule’ for the aroma. Its pleasant aroma has seen it used in perfumery, cosmetics, and as a food additive – however, these uses come at a price. Only around 1-4mg of raspberry ketone can be extracted from a kilogram of raspberries, and as a consequence the cost of the naturally occurring compound is significant. Synthetic forms of the compound are, however, less costly.