The Chemistry of a Hangover 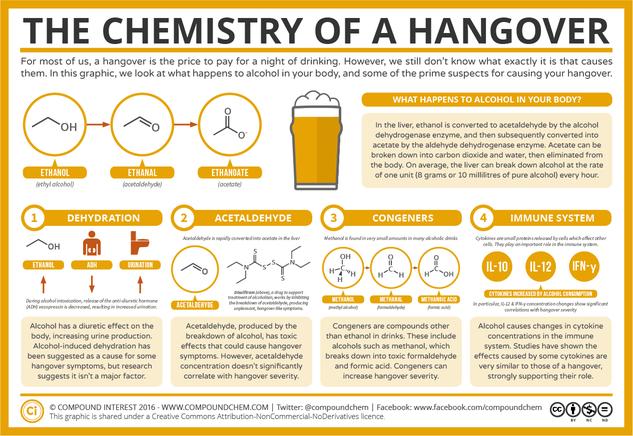 The Chemistry of a Hangover

After yesterday’s new year celebrations, you might well be nursing a sore head this morning after a few drinks too many. This is a chemical consequence of consuming alcoholic beverages, but it’s one that, surprisingly, we still don’t fully understand. There are, however, a number of chemical suspects that have been identified as contributing to the symptoms of a hangover; here, we take a look at each in turn, and the evidence for their contribution.

It’s worth clarifying, before discussing the factors causing a hangover, that there’s a significant number of things that can affect a hangover’s severity. We all know that one person who enviably claims never to experience hangovers; studies have shown that genetic factors could go some way towards explaining this, and health, age, and sleep can all also have effects on how bad your hangover is. In general, most studies have shown that reaching a blood alcohol concentration of 0.1% is required for most people to experience the symptoms of a hangover the following day, though obviously this will still be variable from person to person. It’s also generally accepted that the higher your peak blood alcohol concentration (simple translation: the more alcohol you drink), the worse your hangover symptoms are likely to be.