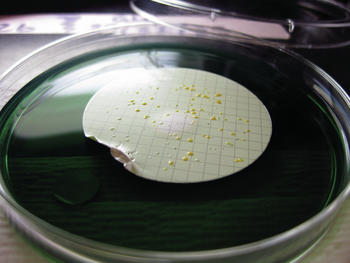 Vibrio colonies growing on a filter

Bacterial viruses, so-called phages, destroy bacteria. Bacteria are constantly exposed to viral attacks. A research team led by Martin Polz, a microbiologist at the University of Vienna, has now studied how bacteria defend themselves against viral predators. The study shows that bacteria have exchangeable genetic elements that are specifically designed for defense against viruses, allowing a bacterial population to switch its innate immunity surprisingly quickly. The question of how and how quickly bacteria develop resistance to viruses is of central importance for the development of phage-based therapies against bacterial infections.

The predatory interaction between bacteria and phages

Bacteriophages are viruses that use bacteria as host cells. In the process of reproducing themselves, they destroy the bacterial cell: Infected bacteria produce viruses until they burst. As microbial predators, phages significantly shape the diverse communities of microorganisms that play an important role in all environments, for all living organisms and also for human health. In addition, because of increasing antibiotic resistance, phages are considered a promising alternative to antibiotics in the treatment of bacterial infections. "People actually used phages early on to fight bacteria. However, they were then replaced by antibiotics because the interaction between viruses and bacteria was still poorly understood," says Martin Polz from the Center for Microbiology and Environmental Systems Science (CMESS) at the University of Vienna. About a year ago, the microbiologist moved from the Massachusetts Institute of Technology (MIT) in Cambridge (USA) to the University of Vienna. A research project that he initiated with his team at the MIT got to the bottom of this interaction.

The team of researchers from the University of Vienna, the MIT and the Sorbonne Université in Paris (France) has studied in detail how bacteria defend themselves against viruses. "Each bacterial cell has a set of defense genes that enable it to eliminate certain viruses," explains the head of the research project. "Our study shows that these defense genes are exchanged very quickly between bacterial cells. This is possible because they are integrated into so-called mobile genetic elements that themselves control whether and when they transfer from one cell to another."

Each bacterium not only possesses a core genome that it shares with all other bacteria of its species, but also contains mobile genetic elements. This mobile, exchangeable genome can differ between individual bacteria, but its overall function has remained poorly understood. The study shows that it primarily serves one purpose: phage defense. Accordingly, the fight against viruses shapes the exchange of genomes and thus bacterial evolution. "The findings put a spotlight on the importance of phage defense in the microbial world," Rotem Sorek, a professor at Israel's Weizmann Institute of Science, comments on the findings. Sorek – he himself was not involved in the study – conducts leading research on the interaction of phages and bacteria. With the precise analysis of these defense islands, the scientists have solved a puzzle that has been occupying researchers for the past decade, he says.

The study analyzes defense mechanisms innate to the genome. "Our results highlight that this innate immunity is mainly responsible for the defense against viruses. Based on laboratory experiments, it had previously been assumed that bacteria defend themselves against viruses primarily by modifying receptors located on their surface," Fatima Aysha Hussain, lead author of the study, explains. For three months, the researchers collected water samples on the New England coast every day to explore the interaction between Vibrio bacteria and those viruses that interact with them in their actual habitat. Using genomic and genetic analyses, they observed extremely rapid evolutionary change: Over the 93 days of study, individual bacteria developed specific resistances via the exchange of mobile gene elements. "These changes happen over a few generations, i.e. cell divisions," explains principal investigator Martin Polz. "This translates to bacteria being able to develop resistance to certain viruses within a few weeks to months in the wild."

Phages and bacteria interact very specifically. Hence, viral attacks are successful on individual bacteria only, and not on an entire bacterial species. The study demonstrates why this is the case: "The defense genes are very diverse and are exchanged very quickly, so that there are always a large number of resistant individuals in the population," explains Martin Polz. The findings of the study not only provide fundamental knowledge on how microbial communities are functioning. They also point to challenges in combating bacteria with phages: "The rapid acquisition of resistance must be taken into account in developing phage therapies, precisely because mobile gene elements similar to those we studied are also responsible for the rapid development of antibiotic resistance."