Unexpected interaction between the protein APC and heme discovered 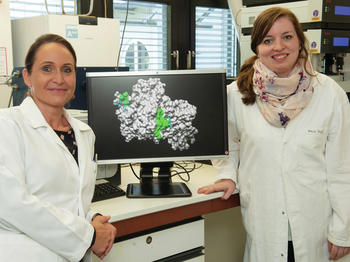 Prof. Dr. Diana Imhof (left) and Marie-Thérèse Hopp from the Pharmaceutical Institute, University of Bonn, next to the homology model of APC with the heme-binding sites (green).

The hemoglobin in the red blood cells ensures that our body cells receive sufficient oxygen. When the blood pigment is broken down, "heme" is produced, which in turn can influence the protein cocktail in the blood. Researchers at the University of Bonn have now discovered in complex detective work that the "activated protein C" (APC) can be commandeered by heme. At the same time, APC can also reduce the toxic effect of heme. Perspectively, the findings may provide the basis for better diagnostic and therapeutic approaches to blood diseases. The study has been published online in advance in the journal "Antioxidants & Redox Signaling".

“Blood is a juice of very special kind," is what Johann Wolfgang von Goethe had his Mephistopheles say. The hemoglobin gives blood its red color and ensures that the erythrocytes (red blood cells) can bind oxygen for breathing. This is managed by the hemoglobin-bound molecule "heme", which is a complex composing of a central iron ion and a porphyrin molecule. "The breakdown of erythrocytes results in a pool of so-called labile, regulatory heme," explains Prof. Dr. Diana Imhof from the Pharmaceutical Institute of the University of Bonn. As it can exert toxic effects in high concentrations, the body tries to keep the amount of heme in check.

It has been known for quite some time that this "labile, regulatory heme" affects the function of biomolecules. The team around Diana Imhof has now discovered in meticulous detective work which of the many proteins in the blood is particularly under the control of heme. "Over the last few years, our research group has established a large database of model peptides," reports Imhof. The peptides are individual protein "snippets" from which the sometimes huge and complex structures are built. Instead of studying the giant molecules, the proteins, in their entirety, the researchers first took a shortcut with the snippets.

The pharmacists at the University of Bonn proceeded in a similar way to profilers in thrillers, who draw conclusions about the perpetrator's behavior from crime scene traces, circumstantial evidence and the type of crime. The researchers used an algorithm to systematically search the database for protein fragments that might potentially interact with heme. Using these data, they were able to conclude that the "activated protein C" (APC) is a particular candidate for heme binding. This enzyme is known for its anticoagulant and clot-dissolving effect, but can also take over cell-protective and anti-inflammatory tasks.

"So far, the impact of heme on the function of APC has been unknown," says Imhof's colleague and lead author of the study, Marie-Thérèse Hopp. The researchers investigated the association with pure compounds in the test tube and by using blood plasma samples provided by the Institute of Experimental Hematology and Transfusion Medicine at the University Hospital Bonn. There, Prof. Dr. Bernd Pötzsch and Dr. Nasim Shahidi Hamedani also supported the pharmacists with know-how, APC samples, test systems and access to specific devices. "We demonstrated that the enzymatic and anticoagulant activity of APC is reduced in the presence of heme," reports Hopp. For example, if there is too little APC or its activity is restricted, the risk of a clot forming in the bloodstream increases, thereby causing thrombosis, heart attack or stroke. Indeed, diseases with an increased incidence of labile heme (hemolytic diseases), such as sickle cell disease, are often associated with thrombotic complications.

"For this reason, the influence of heme on the enzyme APC is more significant than has probably been suspected so far," says Imhof. Furthermore, the team discovered that APC might protect the cells of the inner blood vessel wall like a bodyguard against the cytotoxic effect of heme. The researchers cultivated human endothelial cells and exposed them to heme. If APC was present at the same time, the toxic effect of heme on the cells was suppressed.

"We are convinced that this interaction between APC and heme is significant, because many other blood proteins we were looking for did not bind heme," says Imhof. It might be worthwhile to further investigate the impact of labile, regulatory heme on APC in order to also gain new diagnostic and therapeutically relevant insights regarding blood coagulation disorders that occur in hemolytic diseases. Imhof: "The terrain should be explored much more thoroughly than has been the case to date."