Orphan Drugs – An Alternative to the declining Blockbuster Model?

Up until the new millennium, the pharmaceutical industry grew stronger by 11%. However, the blockbuster model is increasingly at risk and the declining growth rates in the industry require a search for new strategies. In this context, orphan drugs are becoming increasingly important. Novumed Life Science Consulting has investigated the market for orphan drugs and found that there is still no drug in development for many rare diseases.

Until the turn of the millennium, the world of large pharmaceutical companies still appeared to be in order. Until 2002, the industry boasted two-digit growth rates of approximately 11%. Since then, annual growth has declined steadily to only about 4%. The industry achieved its impressive results of the past due to its focus on "blockbuster drugs" (annual sales > US$ 1 billion). 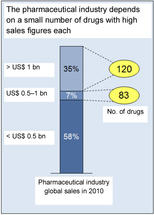 The focus was on diseases with very high prevalence, such as metabolic disorders (dyslipidemia and hyperlipidemia), cardiovascular diseases or diabetes. According to an analysis of the Novumed consultants, 120 drugs fulfilled the definition of a "blockbuster" in 2010. These drugs generated US$ 302 billion or 35% of the pharmaceutical sales total of US$ 850 billion. In this era of "blockbusters", little attention was given to the so-called "orphan diseases". These diseases affect about 200,000 patients in America and less than 50 patients per 100,000 people in the EU. It is estimated that there are between 5,000 and 7,000 of those rare diseases and that they affect about 6% to 8% of Europe's population.

The United States and the EU have adopted laws that create incentives for the pharmaceutical industry to develop drugs for rare diseases. The indication of the drug to be developed shall cover no more than 200,000 patients in the United States and no more than 50 patients per 100,000 people in the EU. Once a medical indication meets the criteria of a rare disease, attractive benefits such as market exclusivity, scientific advice, assistance in preparing the study protocol, fee discounts, tax benefits and financial support are available.

According to a study by Forbes magazine, the annual treatment costs with drugs can be up to US$ 400,000, with the treatment costs of the nine most expensive drugs exceeding US$ 200,000 per year each. All drugs were bioengineered drugs with "orphan status". Pricing is an important criterion of profitability of "orphan medicinal products". Pharmaceutical companies can achieve high prices in this segment, because rare diseases affect only a small number of patients and the medical demand is very high due to the lack of treatment alternatives.

The global orphan drug market is predicted to grow at a rate of 6% until 2015, amounting to US$ 112 billion. In the meantime, large pharmaceutical companies – Pfizer, GlaxoSmithKline, Novartis and MSD – have recognized the attractiveness of this market and established research programs specializing in orphan medicinal products. The growing number of applications to be granted an orphan drug status is proof that the acceptance of orphan drugs is continuously increasing.

Novumed has examined a sample of 71 of more than 600 orphan medical indications: For 42 of the 71 diseases, there were no drugs in development. This means that the potential for first-in-class drugs in the field of rare diseases is obviously still high. Most drugs have been developed for respiratory diseases and neurological indications. 66% of the respiratory drugs have been developed for cystic fibrosis, and 80% of the neurological medicines for Huntington’s disease.

"Orphan drugs" have indeed a high market potential; however, the most attractive segments have previously not been identified. Because this market is fragmented and insufficiently characterized, there is a lack of reliable market information or competitor analyses. There may be significant growth opportunities for companies who opt for a change in strategy.