Campylobacter are Gram negative microaerophilic organisms which are a common commensal of mammals and birds1 and are one of the most frequently isolated causative agents of human bacterial enteritis worldwide.2 Infection in humans is frequently associated with the consumption of under cooked poultry3 and is generally self limiting1 though it can in a small number of cases result in severe complications such as Guillain-Barre syndrome4. Though similar spiral shaped organisms had been observed in stool samples from enteritis patients for many years, Campylobacter jejuni was only properly linked with disease in the 1970’s when new culture methodologies were developed.5 C. jejuni has quite stringent requirements for growth, namely; a rich nutrient broth, temperatures of 37-42°C, and microaerophilic conditions, i.e. oxygen reduced to 5-8% and carbon dioxide elevated to 10%. It has been suggested that these conditions closely mimic those in the intestine of avian hosts to which the bacteria have become adapted in the wild.

Historically in our laboratory Campylobacter jejuni growth studies have been performed in shaking liquid cultures in 15 mL tubes maintained at 42°C with 7% O2 and 10% CO2 in a variable atmosphere incubator (VAIN) cabinet; these are then removed temporarily from the incubator to take optical density readings at regular intervals. There are several limitations of this method: the samples are necessarily exposed to laboratory atmospheric conditions and temperature during the time taken for the sampling; the slow doubling time of C. jejuni means that ideally samples need to be taken over a 24 hour period; and there is a physical limit to the number of samples and replicates that can be easily handled in the VAIN.

Described here is a comparison of C. jejuni growth studies performed using the traditional method of tubes shaking in a VAIN with that of a study completed in a 96 well microplate format using a FLUOstar Omega plate reader equipped with the Atmospheric Control Unit (ACU) to independently control oxygen and carbon dioxide. 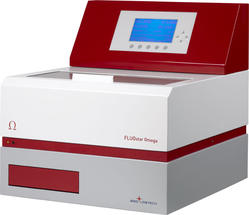 Strains were recovered from -80°C freezer stocks onto MHA plates containing trimethoprin and vancomycin (VT) and grown overnight in the VAIN (a Whitley VA1000 Workstation; Don Whitley, UK) at 42°C under 10% CO2 and 7% O2. Plates with growth were swabbed and re-plated to fresh MHA plates, containing appropriate antibiotics as required, and re-incubated in the VAIN overnight. These plate cultures were used to inoculate 5 mL MHB (+VT) starter cultures which were then incubated with shaking (50 rpm) overnight in the VAIN. The optical density (600 nm) of each starter culture was measured and the cultures were then diluted accordingly in fresh MHB+VT to give a final OD600 of 0.01 (generally a 50- to 80-fold dilution).

Triplicate cultures of 8 mL in 15 mL tubes were prepared for each strain and placed in the VAIN shaking at 50 rpm. Every few hours the cultures were removed from the VAIN, a small sample was taken, and the optical density at 600 nm was determined using cuvettes and a spectrophotometer.

Starter cultures were generated in the VAIN using the same method as above and the strains were diluted in fresh MHB+VT to give cultures with OD600 of 0.01. Multiple 200 µL aliquots of diluted cultures were inoculated into individual wells of a 96 well microplate – for these experiments we used 6 technical replicates and two MHB blanks per strain. The plate was then sealed with a gas permeable pre-pierced seal taking care to position the pierced slits away from the centre of the wells to avoid interference with the absorbance measurements. The plate was then incubated in the FLUOstar Omega at 42°C with the Atmospheric Control Unit set to independently control the O2 to 7% and the CO2 to 10%. Oxygen Free Nitrogen and Carbon Dioxide bottles were connected at 30psi. Absorbance at 600 nm was measured (20 flashes/cycle) for forty-nine cycles of 30 minutes with continual shaking (double orbital) at 500 rpm between measurements.

Typical growth curves for Campylobacter grown in tubes in the VAIN are shown in Figure 2. 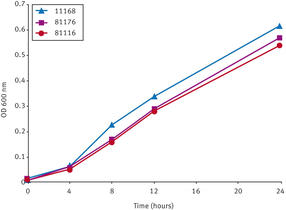 Fig. 2: Growth of C. jejuni genome strains over a 24 hour period grown in shaking tubes in a VAIN

Growth typically exhibits a 4-5 hour lag phase before growing exponentially to an OD600 maximum of 0.5-0.6 depending upon the strain. Growth for Campylobacter strains in 96 well plate format incubated in the FLUOstar Omega with Atmospheric Control Unit is shown in Figure 3. 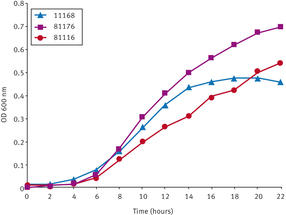 Fig. 3: Growth of Campylobacter isolates over a 24 hour period in the FLUOstar Omega

The lag phase exhibited during growth in the microplate format appears to be slightly longer than in the tubes however the growth curves are very similar and the maximum growth levels achieved after 24 hours are comparable.

The programmed automated data collection provides the ability to measure growth curves over extended periods with readings at regular intervals. This generates growth curves with much more detail which is important when comparing subtleties in response. The capacity to control both gases independently provides the ability to test growth under different conditions quickly and simply. Furthermore different O2 and CO2 concentrations can be set for other microorganisms, Salmonella, Neisseria etc, without the need to change the gases or to connect bespoke gas mixes.

The ability to perform and monitor growth simply in a multi-parallel manner provides us with the capacity to rapidly perform growth studies analysing multiple mutants across a range of Campylobacter strains. Additionally the added potential of being able to work under different oxidative conditions will allow us to undertake comparative growth experiments which we would not have previously considered due to the constraints of having multiple users in one VAIN cabinet.

Comparing growth of Campylobacter in tubes incubated in a VAIN incubator to those grown in 96 well plates in the FLUOstar Omega with atmospheric control clearly demonstrates that the growth of this fastidious organism can be transferred to a 96 well format. This is made easy by the design of the FLUOstar Omega providing temperature control and shaking together with the Atmospheric Control Unit that facilitates the independent control of both O2 and CO2 in the reader.