During manufacture of antibody molecules, they are subjected to mechanical stress generated by processes such as pumping and filtration. This may cause denaturation and consequently aggregation due to exposure of the protein to air-liquid interfaces and shear forces, resulting in the ultimate loss in bioactivity.

Hence in the process of candidate selection, data regarding the aggregation propensity of antibody molecules in various buffer conditions would aid in the prediction of problems that would potentially be encountered during manufacturing and shelf-life stability. Shaking stress is a convenient method to screen and compare the robustness of antibodies in different buffer conditions in manufacturing and serves to mimic the effect of stress at air-liquid interfaces. 1,2

Experiments have been performed where various antibody molecules have been stressed by vortexing in 1.5 mL tubes and the extent of aggregation measured by the change in turbidity (absorbance at 340 nm/595 nm). This involves removing aliquots at various time points for manual analysis by a spectrophotometer and although this methodology is useful for screening different antibody candidates it cannot accommodate large numbers of samples and the data collection is inefficient.

A higher throughput (96 well plate format) screening method is required which would allow continuous real time measurement of aggregation within a convenient time window of analysis.

The FLUOstar Omega microplate reader from BMG LABTECH equipped with shaking options (allowing for linear, orbital and double orbital continuous shaking) with both absorbance and fluorescence detection set up in the kinetic mode allowed us to explore a more efficient method for measuring aggregation propensity.

Initially transfer of the molecules and conditions used in the vortexing experiments to 96-well format proved unsuccessful resulting in negligible changes of aggregation promotion as judged by on-line absorbance analysis (340 nm/595 nm) even over a 7 daytime window.

However, the inclusion of a Teflon bead per well resulted in a change to the absorbance over a 24-48 h time window. The Teflon bead caused interference of the absorbance signal so the measurement of aggregation propensity was monitored by incorporation of an in situ fluorescent dye, Thioflavin T (a benzothiazole dye that exhibits enhanced fluorescence when bound to fibrous aggregates). 3 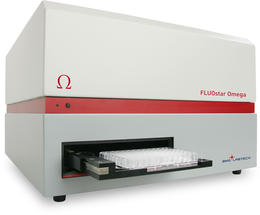 The test solutions were combined as follows:

150 µL of test solutions were used per well of a 96-well microplate, in the presence or absence of one Teflon bead. A plate sealer was used to eliminate loss of sample by evaporation as the experiment was performed at 37°C and for extended times.

The first experiment was performed to establish whether inclusion of a Teflon bead could promote aggregation of an antibody molecule (Fig.2). 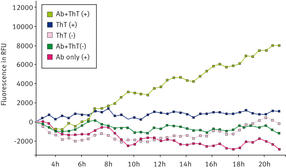 There was only an increase in fluorescence intensity with time when the antibody sample was in the presence of the Teflon bead. It was noted that the overall fluorescence intensity was higher where Thioflavin T was present but there did not appear to be any aggregation promotion as a consequence of being present during the experiment. 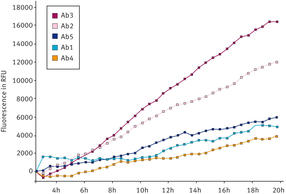 Fig. 3: Effect of shaking on the aggregation propensity of different antibody molecules in the presence of a Teflon bead (in situ ThT).

When five different antibody molecules were examined, it was possible to discriminate between them with respect to their different rates of aggregation in the buffer of interest. It was possible to calculate different rates of aggregation for each of the antibody molecules tested and to obtain a ranking order, see Figure 4. The ranking was in the order Ab3 > Ab2 > Ab5 > Ab1=Ab4, where A3 showed the greatest tendency to aggregate in the chosen buffer. 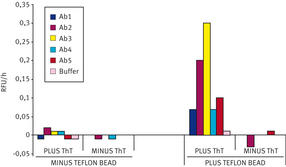 Fig. 4: Rate of Aggregation of the Different Antibody Molecules in the presence and absence of a Teflon bead

Interestingly, the ranking order for the different antibody molecules was equivalent to that obtained when aggregation was promoted by an alternative method (agitation by vortexing - data not shown.)

Since the mechanical stress using the shaking options of the FLUOstar Omega was more gentle compared with the vortexing approach in 1.5 mL tubes, the inclusion of a Teflon bead was required. This served to introduce more turbulence and hence increased the exposure to an air-liquid interface resulting in a faster and more efficient means of promoting aggregation.

Further studies are in progress to assess the use of different buffers and hence aid in pre-formulation work.