MitoExpress® (Luxcell Biosciences) is a water-soluble oxygen-sensitive phosphorescent probe that facilitates microtitre-plate based analysis of microbial oxygen consumption. The ‘mix & measure’ procedure allows rapid and specific detection of microbial oxygen consumption providing a simple yet sensitive means of assessing the impact of a given manipulation on cellular function. Areas of application include, mode of drug action elucidation, screening for antimicrobial compounds, the assessment of bacterial load and the optimisation of culture conditions.

MitoExpress® Oxygen Probe
The MitoExpress® assay provides information on the rate of microbial oxygen consumption. Such measurements can provide insight into the metabolic effect of a specific manipulation or can be used as a measure of survival and replication.

The assay is based on the ability of dissolved O2 to quench the phosphorescence of a soluble, oxygen sensitive probe (MitoExpress®). Probe emission is quenched by molecular oxygen via a physical (collisional) mechanism; whereby depletion of dissolved oxygen causes an increase in probe emission. Changes in probe signal therefore reflect changes in oxygen concentration within the sample.

The assay is a simple ‘mix and measure’ test:
1. Microbes are dispensed into the wells of a 96 well plate in 100 µl volumes in the appropriate growth medium
2. 10 µl of MitoExpress® probe is added to each well
3. 100 µl of mineral oil is added to exclude ambient O2
4. The plate is measured kinetically at the required temperature
5. Oxygen profiles are then related to metabolic activity

Multiplexing of both growth and microbial metabolism is achieved using the BMG LABTECH scripting function. Bacterial growth is measured by absorbance at 600 nm and the oxygen consumption is measured using the MitoExpress® probe which is measured using dual delay, time-resolved measurements. Optimal filter wavelengths are 340TR H for excitation and 655-50 nm emission. Delay times of 30 and 70 µs are used, both with a measurement window of 30 µs respectively. These dual intensity measurements are used to calculate emission lifetime using the following function, τ=t2-t1/ Ln (D2/D1) [t=delay time, D=measured intensity value]. Scripts and protocols can be obtained through your local BMG LABTECH representative. 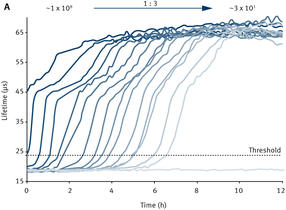 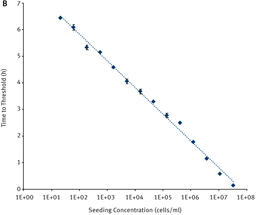 Fig. 1B: Correlation between Time-To-Threshold and Seeding Concentration. The time required to reach the threshold signal (24 µs) reflects the seeding concentration and is dependant on the replication rate and cellular oxygen consumption rate.

Comparison With OD 600
Oxygen and OD600 data can be obtained from the same well thereby allowing multiparametric analysis of cell growth. OD600 values reflect microbial replication rate while oxygen-based analysis reflects both growth and alterations in cell metabolism. Oxygen gradients are detectable considerably earlier than increased in OD600 (Fig. 2) and give a more robust read-out. This multiparametric approach can be useful when probing cell metabolism and elucidating modes of action and can detect any shift from aerobic to anaerobic metabolism in facultative anaerobes. 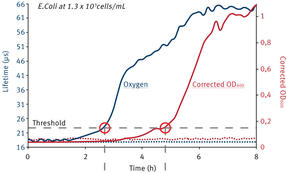 Antibiotic Treatment
Microtitre plate-based analysis of microbial oxygen consumption allows the high throughput generation of IC50 and MIC values and can be used to screen for compounds that perturb cell metabolism. A dose response analysis demonstrating this is presented in Figure 3. 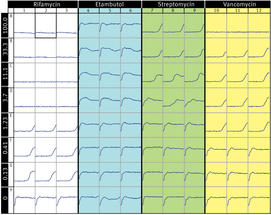 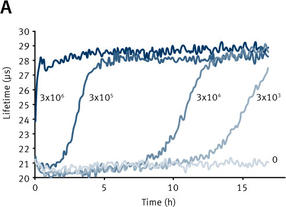 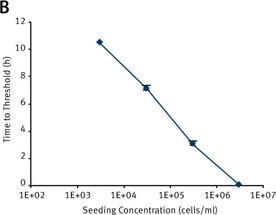 Drug Treatment
The electron transport chain inhibitor Antimycin (Fig. 5A) and the polyene antifungal Amphotericin B (Fig. 5B) cause an immediate and dose dependant decreases in oxygen consumption while the triazole antifungal Fluconazole (Fig. 5C) caused no appreciable decrease in oxygen consumption. These observations correlate with mode of drug action and demonstrate how such measurements can be used to assess the specific metabolic affects of compound treatment.

MitoExpress® facilitates simple and convenient probing of microbial metabolism and can be applied to the analysis of both bacteria and yeast. The metabolism implications of treatments such as drug exposure, genetic manipulation or altered culture conditions can be easily accessed and elucidation of mode of action is facilitated. The assay provides the throughput and resolution necessary for screening and is capable of detecting antimicrobial activity and generating IC50 and MIC data. 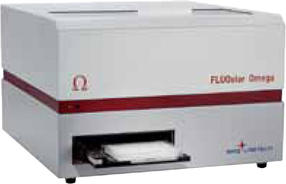