Development and production of biopharmaceuticals is a growing segment of pharmaceutical industry. Therapeutic proteins include blood factors, thrombolytic agents, growth factors, interferons, interleukins, therapeutic enzymes and last but not least monoclonal antibodies. More than twenty monoclonal antibody (MAb) therapeutics have been approved for the treatment of a broad range of diseases including autoimmune, cardiovascular, infectious diseases and cancer. A thorough characterization of therapeutic biomolecules is a key task for the successful submission of research and production data for regulatory approvals of new drugs. Due to its high degree of automation, robustness and reproducibility liquid chromatography is the workhorse of the pharmaceutical laboratory. Therefore, HPLC is also frequently used when establishing analysis methods for biotherapeutics. This article features some of the most frequently used HPLC applications for the characterization of biopharmaceuticals.

The typical chromatographic modes for separation of proteins in native form such as size exclusion chromatography (SEC) and ion exchange chromatography (IEC) are routinely used for the characterization of biotherapeutics. In addition reversed phase (RPC) and hydrophilic interaction liquid chromatography (HILIC) are applied to characterize protein moieties such as peptides or oligosaccharide chains after enzymatic cleavage. Detection is usually performed by UV, fluorescence or light scattering. Additional structural information can be obtained by applying mass spectrometric detection. Some of the common modes of biochromatography are illustrated in this article by using the examples of important aspects of protein characterization such as analysis of protein aggregates, isoforms, modifications and glycosylation.

DETERMINATION OF PROTEIN AGGREGATES BY SEC

Protein aggregation is a common issue encountered during expression, purification and formylation of protein biotherapeutics. Proteins can aggregate as a function of temperature, pH, ionic strength and concentration.1 Aggregation needs to be characterized and controlled during the development of protein pharmaceuticals such as monoclonal antibodies. Even small amounts of aggregates can alter the MAb’s function as an effective therapeutic. High-performance size-exclusion liquid chromatography on silica-based columns is the industry’s workhorse for separating and quantifying soluble protein aggregates. Aggregation analysis of therapeutic proteins using SEC is almost always required for regulatory approval. Column-free techniques such as sedimentation velocity, analytical ultracentrifugation, and field-flow fractionation are complementary techniques suitable for aggregation analysis.2

TSK-GEL SW series columns are based on highly porous silica particles. The surface has been shielded from interacting with proteins by derivatization. They contain a large pore volume per unit column volume, which results in high resolution when analyzing proteins. TSKgel G3000XL columns are the industry standard for quality control of monoclonal antibodies. When the sample is limited or the components of interest are present at very low concentration, TSKgel SuperSW3000 columns can be applied to achieve even higher performance. The internal diameter of these columns has been reduced from 7.8 mm to 4.6 mm and the particle size from 5 μm to 4 μm to provide higher sensitivity in sample-limited cases. It is important to employ an HPLC system that is optimized with regards to extra-column band broadening to take full advantage of the high column efficiency that can be obtained on these columns. 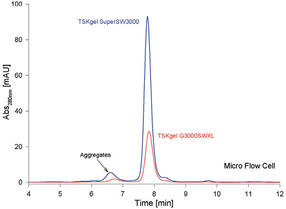 Figure 1 compares the analysis of MAb aggregates on both column types. Separations were performed on an optimized HPLC system equipped with a micro flowcell under identical conditions. Due to the different inner diameters of the columns the flow-rates must be different to apply the same linear flow, resulting in a flow-rate of 1 mL/min for the 7.8 mm ID G3000SWXL column and 0.35 mL/min for the 4.6 mm ID SuperSW3000 column. Figure 1 shows that resolution of monomer and aggregate peaks is higher on the SuperSW column, as is the detection sensitivity. 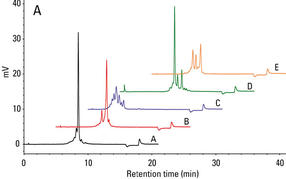 ANALYSIS OF CHARGE VARIANTS AND PEGYLATED PROTEINS BY IEC

Besides isoelectric focusing, cation exchange chromatography is the method of choice to analyse charge heterogeneity of proteins. Charge isoforms of proteins result from deamidation of asparagine or glutamine residues or from incomplete removal of C-terminal lysine residues.3 Newly developed ion exchange columns can help to increase throughput in quality control (QC) of biopharmaceuticals. TSK-GEL STAT ion exchange columns are non-porous polymer columns with a high surface density of functional groups: quaternary ammonium for anion exchange (Q- and DNA-STAT), carboxymethyl (CM-STAT) and sulphopropyl (SP-STAT) for cation exchange. Particle sizes and dimensions of these IEC columns are optimized either for highest throughput or for highest efficiency. Applications for the TSK-GEL STAT cation exchange columns include the separation of peptides and proteins, PEGylated proteins and charge isomers of monoclonal antibodies. A TSKgel CM-STAT weak cation exchange (WCX) column was applied to separate charge variants of several monoclonal antibodies (Figure 2). The typical analysis time on conventional 25 cm long WCX columns of about forty minutes could be significantly reduced when separation was performed on a 10 cm CM-STAT column, filled with 7 μm particles. The analysis profiles for five antibodies show that high resolution analysis can be obtained in about 20 minutes analysis time.

PEGylation, the process by which polyethylene glycol (PEG) chains are attached to protein and peptide drugs is a common practice in the development of biopharmaceuticals to prolong serum half-life and improve pharmacokinetics of a drug.4 Lysine residues of the protein typically serve as PEGylation sides. There is increasing demand for chromatographic methods to separate the modified isoforms from the native protein. The degree of PEGylation can be monitored by analysing the increase in molecular weight by size exclusion chromatography, as every PEG group remarkably increases the apparent size of the protein. As every PEG residue also shields parts of the protein and, therefore, alters the overall surface charge, ion exchange separation can be used as well to analyse PEGylated proteins. SEC separates the native protein, mono- and di-PEGylated forms but because of the specific mode of interaction free separation it requires a certain analysis time and is, therefore, not well suited for high throughput applications. IEC, however, can be accelerated by using shorter columns and latest particle technology as shown on the left. In addition IEC has the ability to resolve isoforms differing in the position of PEGylated lysine residues, as the surface charge of the protein varies depending on the position of the modification.5

Figure 3 shows the monitoring of a PEGylation reaction of ß-Lactoglobulin in intervals of 5 minutes on a highthroughput TSKgel SP-STAT strong cation exchange (SCX) column. A fast gradient of sodium chloride in sodium acetate buffer at a high flow rate of 2 mL/min was applied to achieve fast separation. An efficient reaction monitoring has to follow the progress of the reaction in short intervals. Therefore a high throughput column was applied here. For a more detailed characterization of the final product a better separation of the different Mono-PEG isomers can be achieved by using a high resolution SCX column (10 cm length, smaller particles) and a more shallow gradient profile.

CHARACTERIZATION OF PROTEIN GLYCOSYLATION BY HILIC

Another important QC parameter of MAb characterization is the analysis of glycosylation. Glycosylation of MAbs may influence immunogenicity, pharmacokinetic and pharmacodynamic properties. According to the EMEA guideline on development, production, characterization and specifications for monoclonal antibodies and related products ‘glycan structures should be characterized, and particular attention should be paid to their degree of mannosylation, galactosylation, fucosylation and sialylation’.6 Several complementary analytical techniques are routinely used to characterize, identify and quantify oligosaccharides isolated from glycoproteins.

The standard method for QC analysis of glycans is the HILIC/normal phase separation of AB-labeled glycans followed by fluorescence detection. Tagging the glycans with a fluorescent label such as 2-aminobenzamide (2-AB) allows the sugars to be detected at femtomole levels. HILIC can separate structures with the same composition (isobaric glycoforms such as α-2,3- or α -2,6-sialic acid) on the basis of both sequence and linkage.7,8 Complementary methods suitable for complete characterization of glycan structures comprise of HILIC-MS, weak anion exchange or porous graphite carbon separation of 2-AB labeled glycans, capillary electrophoresis of APTS-labeled glycans or the LC–MS peptide map of glycopeptides.

The chemistry of amide-bonded HILIC phases is ideally suited for the separation of charged and neutral fractions of glycan pools in one run. The retention of fluorescence labeled polysaccharides by TSKgel Amide-80 enables the identification of glycan structures by comparison to a labeled dextran ladder. The dextran ladder is used to normalize retention times to calculate the number of glucose units (GU values) of the separated glycans.

As demonstrated here, there are a broad range of HPLC applications used in development, production, validation and release of protein therapeutics for human use. Some of the applications mentioned above are mandatory when submitting a new biopharmaceutical to approval at the regulatory agencies. The introduction of the first so-called biosimilars in Europe further increased the demand for highly efficient analysis methods. The continuous development of new stationary phases for the common modes of biochromatography, such as size exclusion, ion exchange and hydrophilic interaction chromatography support biochemists in increasing lab productivity and establishing high-throughput HPLC analysis not only for small molecules but also for large biopolymers.

Regina Römling is Marketing Manager at Tosoh Bioscience GmbH, with responsibility for the marketing of separation products such as HPLC columns and process resins. Prior to joining the Tosoh team in 2007, she was a Product Specialist for HPLC systems at Shimadzu. In 1990, Regina graduated in chemistry, specialising in biochemistry, at the Westfälische Wilhelms-University of Münster (Germany). Her background includes five years of research work in molecular biology and genetic engineering at the University Hospital, Münster, and about 15 years’ experience in liquid chromatography and mass spectrometry.