Sniffing Out the Secrets of Social Behavior

Prof. Marc Spehr on the New Understanding of Olfactory Neurosensorics 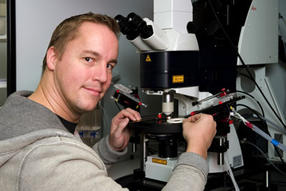 Fig. 1: Prof. Marc Spehr tested the new Leica DM6000 FS Fixed-Stage Microscope before the market launch already. “We are highly satisfied with the microscope’s optics and stability. We find the large working distance and the space around the specimen impressive, too. The accessibility to the specimen area is of great importance to us neurophysiologists, as we need a lot of peripheral equipment.”

In his novel “Perfume – the Story of a Murderer”, Patrick Süskind managed to put the power of odors into words better than anyone before him. It may be a fascinating idea, but no one will ever be able to create the perfect fragrance that makes a person irresistibly attractive. In the animal world, on the other hand, olfactory signals are an essential element of social communication. Yet we are only just beginning to understand the complexities and functional differences of the sense of smell in mammals.  Professor Marc Spehr is leading the Department of Chemosensation at RWTH Aachen University since 2009, where he is conducting research on the neuronal mechanisms of olfactory perception and signal processing using the mouse model. In his experiments, he and his team are trying to find out how substances for social interaction are perceived and how this perception generates a specific type of behavior.

Professor Spehr, why are scientists becoming more and more interested in the nose?

You could say this was triggered by the discovery of the multigene family of olfactory receptors by Linda B. Buck und Richard Axel in 1991, for which both were awarded the Nobel Prize in 2004. Since then, the nose, in particular the subject of molecular chemosensation, is definitely “en vogue”. We have only recently gained new and exciting information that has put some of our previous knowledge of the mammalian sense of smell in jeopardy. We used to think the olfactory system consists of only two anatomically and functionally separate components: the nasal membrane or main olfactory system that does the actual smelling, and the vomeronasal organ (VNO) or accessory olfactory system which detects socially relevant chemosignals, often referred to as pheromones.

Today, two additional olfactory subsystems, the septal organ and the Grüneberg ganglion, have been discovered or rediscovered. And not only that – we know now that the functional structure of the sense of smell is far more complex and differentiated than we used to think. For instance, some social signals are recognized via the main olfactory epithelium just like some 'conventional' odors can be detected via the VNO. Within the subsystems, different neuron families are specialized for specific sensory stimuli and exhibit characteristic axonal projection patterns. In the last five years in particular, groundbreaking discoveries about such specialized nerve cells in the main olfactory mucosa have revealed that they have a totally different repertoire of signaling proteins than the canonical olfactory cells we have long been familiar with.  Recent publications have shown, for example, that the sensors of the Grüneberg ganglion probably act as both smell and cold sensors.

What have you discovered about olfactory receptors?

Working together with Prof. Ivan Rodriguez from the University of Geneva, we were able to show in 2009 that the VNO not only comprises the two already known V1R and V2R receptor families, but also a third group, the formyl peptide receptors (FPR). Two other representatives of this receptor type are known from immunology, where they play a key role in the chemotactic reaction of immune cells toward the site of a bacterial infection or inflammation. Our results suggest that the FPRs could provide a mechanistic explanation for an already known sensory phenomenon in rodents: Mice can smell whether other mice are healthy or sick.

We still need to find out a lot more about the molecular processes of the sense of smell and the coding logic of social chemical signals. However, our new understanding of the olfactory system also leads to new and exciting issues. If we manage to decipher the different receptor types and their signal transmission strategies within neuronal networks, we will gain a better understanding of the neurophysiological basis of social behavior in mammals. 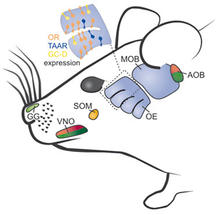 Fig. 2: Diagram of the olfactory subsystems of a mouse. The overall view shows four anatomically separate types of peripheral sensory tissue: the main olfactory epithelium (OE), the septal organ of masera (SOM), the Grüneberg ganglion (GG) and the vomeronasal organ (VNO). The axons of sensory neurons of the OE, SOM and GG project onto glomerular structures in the olfactory bulb (OB), whereas vomeronasal neurons form synaptic contacts with dendrites of mitral cells in the accessory olfactory bulb (AOB).

What issues are you working on at present?

One of our current research projects focuses on what happens in a vomeronasal nerve cell when an FPR has bound its ligand, i.e. how this chemical binding signal is translated into action potentials by the neurons. The biochemical translation of olfactory stimulation into the language of the brain is a key focus of our experiments.

Another topic we are currently working on is the processing of signals in the so-called accessory olfactory bulb, the part of the olfactory brain that receives information from the VNO. We are trying to understand how excitatory and inhibitory neurons interact, how the information originates that ultimately triggers changes in hormone levels and behavioral reactions.

Could this chemosensory knowledge be clinically relevant in future?

At the RWTH Aachen, we are in close contact with our colleagues in the Department of Psychiatry. It is well-known that one of the symptoms of neurodegenerative diseases such as Parkinson’s or Alzheimer’s is a damaged sense of smell. The exact link is not clear yet, but we know that this symptom is noticeable at an early stage of the disease. It would therefore be conceivable that this could play a role in early diagnostics. Another extremely futuristic idea, though maybe not entirely absurd, could be to develop an artificial VNO, with FPRs acting as a biosensor for diagnosis of medical disorders.

Can the findings from the animal models be transferred to humans, too?

Only to a limited extent, as the sense of smell is even more important for many animal species than for humans. This can already be seen from the number of relevant genes. A mouse has around 1200 genes exclusively encoding odorant receptors. Only about one third of these genes are still functional in humans. We humans no longer show a monomodality that is sometimes observed in animals. We simultaneously process different sensory stimuli, going primarily by visual impressions. Although olfactory cues obviously trigger specific types of behavior in humans as well, we are yet to identify a human pheromone on the molecular level.

Aggressive, territorial or sexual behavior is directly linked to olfactory perception in many mammals. In mice, we can control some behavioral phenotypes via specific chemical signals. I can’t imagine something similar in humans. Besides, social communication on the basis of chemical signals mainly works conspecifically. So when we find something in a mouse, we get new ideas on how and where to look for something potentially similar in humans. 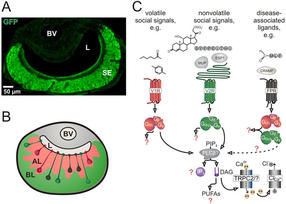 Fig. 3: Tissue architecture and signal transduction pathways in the mouse VNO. A: Confocal microscopic image of a coronal VNO cryosection. Differentiated vomeronasal neurons express a green fluorescing protein (GFP). SE Sensory epithelium, L Lumen, BV Blood vessel. B: Diagram of the vomeronasal system, coronal view. The sensory neuroepithelium can be divided into an apical (AL) and a basal layer (BL). C: In the microvilli of the dendritic ends of the VNO neurons, the receptor-ligand interaction induces a complex biochemical signaling cascade to transform the chemical binding signal into electric pulses. Volatile low-molecular substances likely activate V1R receptors of the apical epithelium layer, whereas V2R receptors of the basal layer are probably stimulated by non-volatile macromolecules. FPR receptors are activated by pathogen- or inflammation-associated ligands. (Published in Neuroforum 1/2001, Spektrum Akademischer Verlag)

You use a wide variety of techniques for your experiments. How important is microscopy for your research?

We use electrophysiological recordings and activity measurements, different imaging methods, molecular-biological, biochemical and behavior analysis techniques. Microscopy, particularly life cell imaging, is one of the central methods in our research. We mainly work with living tissue sections from the nose, the VNO and the olfactory bulb. To correlate electrophysiological measurements with imaging data, we need a good fixed stage microscope equipped with the relevant optical techniques such as DIC and plenty of room for manipulation and perfusion systems and patch clamp pre-amplifiers. For this type of upright microscopy, special water immersion objectives that show high transmission even in the near infrared and UV light range and fast high-resolution cameras are essential. Apart from the optics and accessibility to the area around the specimen, another main criterion is absolute microscope stability. We also use inverted microscopes and confocal systems for our different imaging approaches.