A. Hamilton, R. Liang and B. Whittle

SNPs (Single nucleotide polymorphisms) are positions in genomic DNA with a single nucleotide difference between individuals of a species. SNPs are the most frequent mutations found in DNA sequences. These small genetic variations can occur in coding and non-coding regions of the genome and can either have an extreme or no effect on a particular organism. Therefore SNPs and their detection are important for medical research and pharmacology.
The detection of SNPs (SNP Genotyping) can be achieved with a number of different methods. In this application note we describe a homogeneous fluorescence assay based on PCR. The Amplifluor® SNPs HT Genotyping System from Millipore was used to screen a number of samples with the help of a FLUOstar OPTIMA. 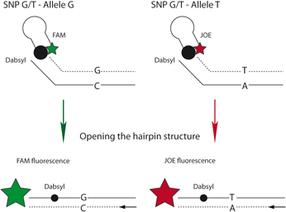 Fig. 1: Principle of the Amplifluor® SNPs Genotyping System after addition of FAM and JOE coupled primers. Scheme is based on Millipores’ patented method.

The method utilises two fluorescently labeled oligonucleotides that consist of a specific 3’ primer sequence region and a 5’ hairpin region that is labeled with either of two fluorophores (FAM or JOE). The presence of the 3’ primer sequence enables these fluorescent oligo-nucleotides to work with target specific unlabeled primers designed to the researcher’s specific target sequence. Thus, the method can be used for any variation of bases. (Fig.1)

The researcher simply designs the allele specific primers containing 5’ tails that match the 3’ tails on the fluorescently labeled primers. In the example depicted in Fig. 1, the FAM labeled primer is G-specific whereas the JOE labeled primer is T-specific. A quencher dye (Dabsyl) is held within close proximity of each fluorophore by the 5’ hairpin region of the oligonucleotide. After successful incorporation of the primers, the hairpin region is opened and the Dabsyl loses its ability to quench the fluorophores, resulting in a large fluorescence signal. The fluorescence produced during each PCR cycle directly correlates to the amount of amplified DNA. A more detailed description of this assay can be found at the Millipore website. 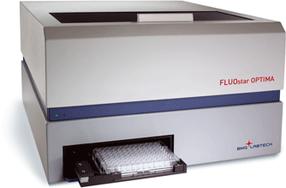 All reagents needed for the amplifcation reaction (except polymerase) should be thawed from -20°C storage. DNA (5-150 ng/µL) that has been diluted in distilled water or TRIS-buffer (but not TRIS-EDTA buffer) is placed in a separate rack. All reagents are mixed thoroughly and vortexed briefly before preparing the amplification mixture. The cocktail of reagents is prepared at room temperature in a sterile 1.5 mL microcentrifuge tube. All reagents are added in the order presented in table 1. The reagents should be mixed with a pipette prior to dispensing.


DNA samples (2 µL for 10 µL reaction mix) are then transferred into a PCR plate. For mutant amplifluors;  mutant, wild type, heterozygote and no DNA controls are used. The polymerase is then added to the amplification cocktail, mixed and spun down. 8 µL of the amplification cocktail is added to each DNA sample/control. The plate is sealed with optically clear strips and then placed into a thermocycler and the PCR program is started.
For some assays a total reaction volume of only 5 µL will also work. The volumes of individual reagents however, need to be adjusted accordingly.

After completion of the PCR procedure the plate is cooled to room temperature. The plate can either be read stored at 4°C or spun down and placed into the FLUOstar OPTIMA for reading. The instrument is set to read FAM (Excitation 490-10 and Emission 520-10 nm) and JOE (Excitation 530-10 and Emission 560-10 nm) in bottom reading mode. 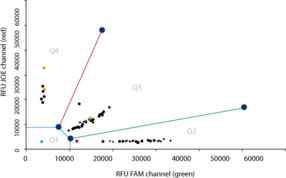 Fig. 3: A typical pattern of samples. The blue dot in Q1 is buffer. The red dot in Q2 shows the mutant control(green allele), Yellow dots in Q4 are wild type control(red allele) and the orange dot in Q3 represents the heterozygote control(red green allele). Figure 3 clearly shows that all controls that are homozygous for either allele or heterozygous or a mixture only are clearly separated. In addition, samples are precisely located in their clusters.

After measurement the data is transferred into an Excel Macro that can be downloaded at the Millipore homepage. A typical result is shown in figure 3.

High S/B values indicate that the FLUOstar OPTIMA is an excellent instrument for running this assay. It is easily capable of measuring the output from the Amplifluor SNP Genotyping assay kit (Millipore) with high precision and with high throughput.