The MagNA Pure 96 System is a brand-new system recently introduced to the market: it is a fully automated, ultra-fast system for high-throughput isolation of high- quality nucleic acids from various sample types that can handle sample volumes of up to 1 ml. The main features of the new system were described in the preceding Biochemica issue (4/2009). This system uses optimized kits with prefilled, ready-to-use reagents in combination with the appropriate automated isolation protocols. The configuration of the kits is based on the well-established magnetic bead technology that has been used successfully on different MagNA Pure Systems for many years now. The MagNA Pure 96 Kits are composed of reagent trays with different prefilled, sealed containers for the buffers and special bottles containing the magnetic particles. All kits are available as small-volume (SV) and large-­volume (LV) variants, depending on the sample amount to be processed. This article describes the features and the performance of the two MagNA Pure 96 DNA and Viral NA Kits and Protocols. 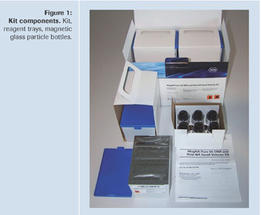 The new kits and protocols were developed and tested using human EDTA plasma, citrate plasma, serum, and whole blood as well as cultured cells (K562 and HeLa) as sample material.


For the isolation of genomic DNA, whole blood was used without pretreatment. Culture cell pellets were resuspended in PBS prior to use.


For the isolation of viral nucleic acid, the samples were spiked with different amounts of DNA viruses (CMV, EBV, parvo B19) and RNA viruses (HAV, influenza A/H1N1) prior to use. The samples were then pipetted into the MagNA Pure 96 Processing Cartridge and processed on the MagNA Pure 96 Instrument. All samples were tested in at least eightfold replicates. Depending on the experiment, the elution volume of the purified nucleic acid was set to 50 µl, 100 µl, or 200 µl. The eluates were analyzed using optical density (OD) measurement, agarose gel electrophoresis, and/or parameter-specific quantitative real-time PCR and RT-PCR assays on the LightCycler® 480 Instrument. The amplification reaction were set up using 15 µl of the respective master mix and 5 µl of the respective eluate and were run for 45 cycles.

The kits are composed of prefilled reagent containers arranged in trays for easy loading, and of separate bottles containing the magnetic glass particle (MGP) suspension (Figure 1). Both the trays and the bottles are placed into the respective position in the instrument drawers prior to the run. The containers can be easily re-sealed after use and stored for subsequent runs if necessary. The MGP bottles have special caps that re-seal automatically after being pierced by the needles of the instrument. All components are stable at room temperature.


The MagNA Pure 96 DNA and Viral NA Kit Small Volume is designed to isolate genomic DNA from up to 200 µl of whole blood or from up to 5 x 105 culture cells. It can also isolate viral DNA or RNA from up to 200 µl of plasma, serum, or blood. The kit contains three prefilled sets of reagent containers for a maximum of 192 reactions each (i.e., 576 purifications per kit).


The kits can be used with a variety of optimized protocols, including optional external lysis protocols to enable virus inactivation outside the MagNA Pure 96 Instrument, if desired. For all protocols, the nucleic acid can be conveniently eluted in a number of different volumes that can be chosen by the user.

The isolation of genomic DNA and its subsequent analysis revealed a high reproducibility, yield, integrity, and purity. According to agarose gel analysis, DNA fragments were on average clearly larger than 20 kb (Figure 2).

The typical DNA yield and purity are summarized in Table 1. Note that the yield strongly depends on the blood cell count and therefore can vary up to a factor of two. The DNA also proved to be free of PCR inhibitors, as shown by dilution experiments followed by a PCR in the LightCycler® 480 Instrument (data not shown).

The scalability of the process was tested using different amounts of blood as samples. The results are shown in Figure 3. 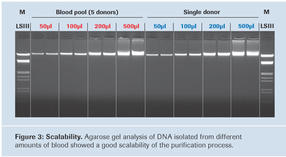 A high recovery of purified viral DNA and RNA was achieved. It was possible to isolate viral nucleic acid from a wide concentration range (Figure 4). 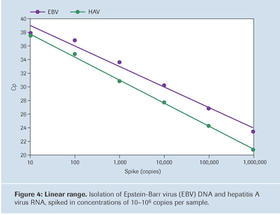 The MagNA Pure 96 System is able to incorporate an internal control (IC) into each isolation reaction. The IC is automatically pipetted from the on-board IC tube into the lysis buffer in each well. This function was checked using diluted parvo B19 plasmid as IC in all 96 wells of a purification run with negative serum as sample material. The IC was isolated with great reproducibility (Figure 5). 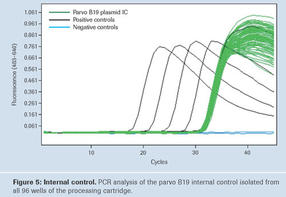 These tests were performed in order to examine the degree of possible well-to-well contamination on the MagNA Pure 96 Instrument. Parvo B19 was chosen as a sensitive parameter for these tests; the detection limit was found to be around 2.5 copies per PCR. Plasma was then spiked with 5 x 107 copies/ml (=106 above detection limit) and processed on the MagNA Pure 96 Instrument using the Large Volume Protocol (500 µl sample) and 50 µl elution volume. 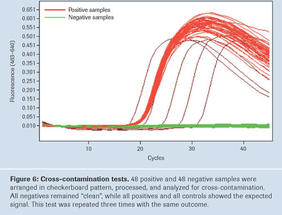 During the optimization of the protocols it was found that some sample materials (i.e., serum, whole blood, and citrate plasma) benefit from a different workflow than the “standard” material EDTA plasma. Therefore, in addition to the “Plasma Protocols”, a second set of “Universal Protocols” is offered, giving much better results (up to 5 crossing points) for these sample types. The name “Universal Protocols” was chosen because they are superior for serum, whole blood, and citrate plasma, but equal for EDTA plasma – at least for the viruses tested (HAV, influenza A/H1N1, EBV, CMV). Since the results may vary depending on the individual experimental setup and the parameter to be examined, both protocol variants are offered in the protocol menu of the instrument, allowing the user to choose the optimal solution for the actual application.

The new MagNA Pure 96 DNA and Viral NA Kits allow the fully automated, efficient isolation of DNA and viral nucleic acids from various sample materials, with maximum speed and recovery. The user can choose between several protocol variants according to the specific needs. In addition, the kits allow the processing of a wide range of sample volumes. Therefore, the new kits will be a useful tool for high-throughput labs.