We used a novel real-time method to analyze the cellular growth of the prostate cancer cell line LNCaP under different conditions. This method allowed us to determine the optimal time points for adding substances that affect cell growth, and reduced the likelihood of missing transient effects. We also characterized the effect of phenol red and fetal bovine serum on LNCaP cell growth, and their interference with hormone stimulation and bicalut­amide (Casodex) treatment.

LNCaP is a commonly used prostate cancer cell line derived from a lymph node metastasis; it is described as androgen sensitive [1]. To investigate the influence of additives on cell growth, LNCaP must be cultured in phenol red–free media containing hormone-reduced fetal bovine serum (FBS) [2, 3]. Several studies have shown that LNCaP cells cease androgen-dependent growth behavior upon passage in phenol red–containing media [4, 5], and that phenol red promotes cell growth in a physiologically abnormal manner [3]. To analyze cell growth in real time, we used the xCELLigence System, which ­measures the electrical impedance during cell growth on gold electrodes [6]. We were thus able to determine the influence of media components on LNCaP cell growth without stimulation, after stimulation with 5a-dihydrotestosterone (DHT), and after addition of bicalutamide (Casodex), an androgen receptor antagonist known to affect LNCaP cells [7].

In our first experiment, we compared the growth of 1 x 104 LNCaP cells/well (96-well MTP) in RPMI (plus phenol red) supplemented with 10% FBS (= normal medium) with growth in RPMI (no phenol red) with 10% hormone-reduced FBS (reduced medium). In both media, we treated the cells with DHT (50 nM) or bicalutamide (5 µM or 20 µM). There was a weak, 1.3-fold increase in cell growth in normal media in the presence of DHT, but growth was reduced in the presence of bi­calutamide. We also observed that while DHT did not reduce cell adhesion within the first 8 hours, cell adhesion was reduced by bicalutamide (Figure 1a and 1b). In reduced medium, the stimulatory effect was seen 8–21 hours after ­seeding of 1 x 104 cells/well (96-well MTP). At that time, DHT stimulation resulted in a twofold increase in cell growth (Figure 1c and 1d). The reduction in cell growth after addition of 20 µM bicalutamide was comparable in the two media (Figure 1c). Simultaneous addition of DHT and bicalutamide resulted in reduced growth compared with untreated cells, and initial stimulation of cell growth by DHT was blocked by later addition of bicalutamide (data not shown). 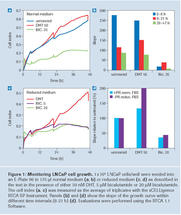 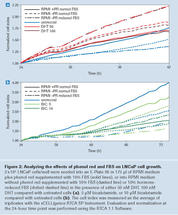 This work was supported by grants from the Deutsche Krebshilfe and the Stiftung Europrofession.