In this study, the xCELLigence System was used to determine and characterize cell death after transfection of the bax gene into HeLa cells using three different commercially available transfection reagents. With the workflow presented here, it was possible not only to evaluate and compare the efficiency and cytotoxicity of different transfection reagents, but also to discriminate between apoptosis and necrosis in response to protein overexpression.

Apoptosis is the major mechanism of cell death. The Bcl-2–associated X protein, or Bax, mediates outer membrane permeabilization in the mitochondrial apoptotic pathway – a point of no return for apoptotic cell death. Transient overexpression of the pro-apoptotic Bax in HeLa cells leads to induction of the apoptotic pathway. The liposomal and nonliposomal transfection reagents used to deliver Bax into cells can, however, exhibit considerable cytotoxic side effects and may lead to misinterpretation of results.


In this study, three different commercially available transfection reagents were used in a workflow involving different in vivo and in vitro assays. Despite comparable transfection efficiencies, only the use of FuGENE® HD Transfection Reagent shows minimal cytotoxic side effects and allows the specific monitoring and detection of bax-induced cell death.

To verify protein expression and determine transfection efficiencies, cells that expressed bax as an enhanced green fluorescent protein (EGFP)-tagged fusion protein were compared with cells transfected with EGFP only, which served as a control. pEGFP and pEGFP-BAX plasmids were introduced into HeLa cells using either FuGENE® HD Transfection Reagent or two other commercially available transfection reagents (designated as TF1 and TF2 here). The extent of protein expression was about the same for all transfection reagents (data not shown). Efficiency of transfection was appropriately high and estimated at about 80% for EGFP and 65-70% for EGFP-bax. Proteins were appropriately localized within the cells (data not shown).

Using the xCELLigence System for continuous, label-free impendance-based cell monitoring, it was possible to capture cellular responses noninvasively and in real time. Growing HeLa cells were transfected in replicates with pEGFP or pEGFP-BAX directly within the E-Plate 96 at 26 hours after seeding. Cell attachment, growth, and responses to transfection were recorded using the ­xCELLigence System every 15 minutes. Cell index (CI) values were normalized to the last measured time point prior to transfection and plotted as means against time using the integrated RTCA Software (Figure 1 ). 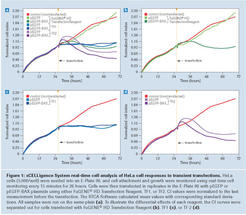 
In contrast, when using transfection agents TF1 and TF2 for the delivery of DNA constructs, CI values remained at the same levels as at the time point of transfection. Even transfected cells carrying the control vector alone did not recover. This suggests a general side effect of the transfection procedure itself; it also suggests that cell death was due primarily to the high cytotoxicity of these transfection reagents.

To quantify viable cells within a population and therefore determine the extent of cell death after transfection, the WST-1 assay was used. The tetrazolium salt WST-1 was added directly to each well of the E-Plate 96 and incubated with transfectants for 1.5 hours in a tissue culture incubator. In metabolically active cells, WST-1 is cleaved into a colored formazan product that can be analyzed using a standard spectrophotometer. The results at 45 hours post transfection correlated with the findings obtained using real-time cell monitoring with the ­xCELLigence System: whereas cells transfected with pEGFP using the FuGENE® HD Transfection Reagent showed only a moderate decrease in viability, all other cell samples showed a strong reduction compared with nontransfected cells (Figure 2 ). 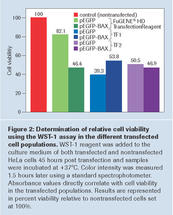 Determining the type of cell death: discrimination between apoptosis and necrosis

To gain insight into the molecular mechanisms of cell death, i.e., to discriminate between apoptosis and necrosis, transfected HeLa cells were subjected to additional functional assays.

A typical indicator of necrosis is cytolysis accompanied by release of cytoplasmic molecules into the cell culture medium. To determine the extent of necrosis-based cell death, the Cytotoxicity Detection KitPLUS (LDH) was used. This assay quantifies cytosolic lactate ­dehydrogenase (LDH) in the cell-free supernatant. At the end of the real-time cell analysis experiment, cell-free culture supernatants were taken from the E-Plate 96 and analyzed for LDH. Compared with the positive control, culture supernatants of nontransfected control cells hardly exhibited LDH activity (Figure 3). The same was the case for FuGENE® HD Transfection Reagent transfectants. In contrast, cells transfected via TF1 or TF2 contained significantly elevated levels of LDH activity in their culture supernatants. This supports the notion that these cells died of transfection-induced necrosis rather than bax-induced apoptosis. 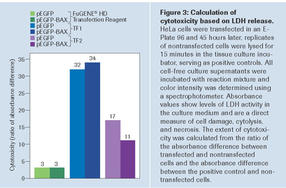 To further analyze cell death by apoptosis, all samples were screened using more specific assays such as the Cell Death Detection ELISAPLUS Kit and the fluorimetric Homogeneous Caspase Assay.


²Quantification of nucleosomes in the cytoplasm (apoptosis)

During apoptosis, various endonucleases are activated and cleave the chromatin into nucleosome-sized fragments of 180 base pairs and multiples thereof. The Cell Death Detection ELISAPLUS is a test to detect the enrichment of nucleosomes in the cytoplasm as a hallmark of apoptosis. Upon completion of the real-time cell analysis experiment, cells were pelleted and lysed in a mild lysis buffer that opens the plasma membrane but leaves the nucleic membranes intact. The abundance of nucleosomes in the cytoplasm was detected using anti-histone and anti-DNA antibodies in the enzyme-based colorimetric biotin-streptavidin binding immunoassay. Color intensity correlated with the amount of detected nucleosomes and was determined using a spectrophotometer. Whereas control and FuGENE® HD Transfection Reagent-transfected cells contained hardly any nucleosomes, overexpression of EGFP-bax resulted in an about sixfold increase of nucleosomes 45 hours post transfection (data not shown). Transfection using TF1 and TF2, in contrast, produced only a moderate enrichment of nucleosomes.

One of the earliest biochemical hallmarks of apoptosis is the activation of caspases that cleave several cellular proteins related to DNA repair and regulation. The Homo­geneous Caspase Assay is a fluorimetric one-step assay for the quantitative in vitro determination of caspase activity. Forty-five hours after transfection, the caspase substrate DEVD-R110 (aspartic acid-glutamic acid-valine-aspartic acid-rhodamine 110) was added to each well of the E-Plate 96 and the plates were incubated. DEVD-R110 was cleaved in proportion to the amount of activated caspases, forming free fluorescent R110 that was detected using a standard fluorescence reader. The overexpression of EGFP by way of transfection using the FuGENE® HD Transfection Reagent produced only a minimal increase in caspase activity (data not shown). FuGENE® HD Reagent-based introduction of the pEGFP-BAX construct led to a 2.5-fold elevation of caspase activation, suggesting a strictly bax-dependent induction of the apoptotic pathway. All samples transfected using either TF1 or TF2 showed a much higher activation of caspases. This up-regulation does not appear to be dependent on bax, as pEGFP alone also increased caspase activation in these cells.


These functional assays verified that FuGENE® HD Transfection Reagent pEGFP-BAX transfectants died primarily due to apoptosis. This is true only for a fraction of the cells transfected with the pro-apoptotic protein bax using the two other commercially available transfection agents.