The novel small molecule inhibitors are often substrates of ABC transporters [1] which influence the pharmacokinetic parameters of the drug candidates and cause drug resistance of tumor cells [2,3]. Therefore expression profiling of ABC transporter genes in cell lines used for drug screening is highly important for anti-cancer drug discovery projects.

PCR reaction and reduction of data was performed based on the settings described in the product instructions (Table 2). The LightCycler® 480 Probes Master was used in the PCR reactions. Relative Cp values were calculated from expression levels of the reference genes. 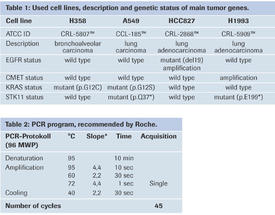 For normalization of the relative Cp values we used the procedure proposed by Vandesompele et al. by using GeNorm [4]. Correlation coefficient was determined by Spearman correlation in the statistics software.

We performed all reactions in duplicate and examined relative Cp values of parallel measurements. We found high reproducibility and low standard deviance between parallel wells and values, except for a few obvious pipetting errors. One example is shown in Figure 1.

Our goal was to identify ABC transporters which are expressed in all lung cancer cell lines and also ­transporters with high variability. We have plotted the relative Cp values (normalized to the reference genes) and the percent of the variation coefficient (SD relative to the mean) (Figure 2). With this analysis we could identify 3 clusters of genes. The first group of genes are stably expressed in all cell lines (with less than 20% CV and less than 10 DCp), the second group consists the ABC transporters expressed at a very low level in all cell lines (less than 20% CV but higher that 15 DCp), the third group of genes show very high expression variability among the cell lines (more than 20% CV). We have also plotted the 5 most stable and the 5 most variable genes on bar diagrams (Figure 3).


These experiments provided novel data on the ABC transporter expression profile of NSCLC cells. Interestingly, these results are also in accordance with previous data, since the expression level of MDR1 (ABCB1) was also found to be very low or absent in research samples of NSCLC [5]. Our findings highlight the relevance of higher throughput expression analysis technologies in cancer research.