Proteasomes are involved in both catabolic and signal transduction processes. Lack of proteasome function may activate compensatory proteases in autophagy by up-regulating the autophagy-related signaling proteases and the lysosomal catabolic proteases. These processes can play a role in both bortezomib-induced neuroblastoma apoptosis and neuronal toxicity.


In this study we evaluated the effect of bortezomib on the expression of a panel of proteases, protease inhibitors, and activation genes in a neuroblastoma cell line model (SH-SY5Y). For this study we used a panel of genes, selected by Roche from our list and accepted the lack of some members of the protease family, which could also have been relevant to this study. The RealTime ready Assays were supplied on a LightCycler® 480 Multiwell Plate 96. We found that using the right normalization strategy, it is possible to identify even small changes in gene expression in response to bortezomib treatment.

RNA was isolated from 2 million cells by High Pure RNA Isolation Kit (Roche) in a final volume of 50 µl. Nucleic acid content and purity was determined using a Nanodrop spectrophotometer (Thermo Scientific). RNA samples used in this study were stored at -75°C for 2 months at most.

cDNA was synthesized from 2 µg RNA by using the Transcriptor First Strand cDNA Synthesis Kit (Roche). A denaturation step of 10 minutes at 65°C was generally performed, except in one experiment. More than 50% of the 84 selected genes did not possess polyA tail, therefore a mixture of randomhexamers and oligo-dT primers were used for the synthesis. The nucleotide sequence of 16 genes exceeded 4,000 bases; therefore synthesis was performed for 60 minutes at 50°C in 20 µl reaction volume in Mastercycler equipment (Eppendorf, Merck). cDNA was used immediately for qPCR run or stored at -20°C for 5 days at maximum.

qPCR using the RealTime ready Protease Custom Panel (Roche) was performed with the LightCycler® 480 Instrument and using the LightCycler® 480 Probes Master in 20 µl reaction, at a volume of 10 ng cDNA/RNA concentration (for the full assay 1 µg cDNA, or as indicated: 0,2-1,6 µg). Reaction conditions were: 95°C for 10 minutes, 45 cycles of 95°C for 10 seconds, 60°C for 30 seconds, and 72°C for 1 second (with acquisition single), followed by 40°C for 30 seconds final cooling.


Normalization of the Cp values and statistical analysis

Normalization of the relative Cp values was done with the GeNorm software using the procedure by Vandesompele et al. [6] (http://medgen.ugent.be/~jvdesomp/genorm/). Identification of the rank order of the stability of the seven housekeeping genes, included on the panel, and the full panel of 91 genes was performed on a database including the relative Cp values of seven plates (2x control, 2x CA-074Me 10 µM, 2x CA-074Me 0,1 µM, 1x bortezomib 100 nM). Using the minimal pairwise variation criteria [6], we selected five housekeeping genes (HG) and seven stably expressing panel genes (SG) for normalization by generating the geometric mean of the expression intensity (or the arithmetic mean of Cp values) of these selected genes for every of the plates. For six control plates we evaluated the mean and SD of normalized (either by HG or SG) Cp values for every gene separately and determined whether the Cp values of the bortezomib-treated samples were outside of 3x ±SD (normalized either by HG or SG). The correlation coefficient was determined using the Spearman correlation.

Reproducibility and linearity of the qPCR assay

To test if the usual 10 ng cDNA/sample was in the linearity range of the assay we performed qPCR runs with 2 ng and 16 ng cDNA/samples prepared from a single cDNA synthesis. Linearity was excellent as evaluated by Spearman correlation (Cp of '16 ng/sample’= -3,108 + 1,013x Cp of '0,2 ng/sample’, Figure 1). Using cDNA samples kept at 4°C for 2 hours reduced reproducibility but retained linearity (Figure 1). Based on these results, we used 1 µg cDNA/plates for the remaining tests and obtained comparable good correlation between two tests using two different cDNA samples from two parallel control samples (Figure 2a). When we omitted the RNA denaturation step in the cDNA synthesis no significant changes were observed comparing to the five other control sample runs (not shown).

Normalization of the qPCR data is crucial for evaluation of relatively small changes in expression. As described in Material and Methods, we used the results of seven panels to determine the optimal selection of housekeeping and other stable genes for normalization of our data using the algorithm of GeNorm software [6]. We selected five housekeeping genes and the seven genes with the most stable expression pattern to generate the normalization factor for neuroblastoma samples. Genes used for normalization and representative agarose gelelectrophoretic samples of the amplicons of the seven genes are presented in Figure 3. Six plates were used to run samples from control cells, normalized with the selected genes and determined the arithmetic mean and standard deviation of DCp values. It is noteworthy that with the two different normalization factors, although the SDs of DCp values for the six control plates were correlated, they differed considerably from each other, indicating the importance of optimizing the normalization factor (Figure 4).


Changes of gene expression induced by treatment with bortezomib

The normalized Cp values of a bortezomib-treated sample were correlated to the DCp values of a control samples (Figure 2b). We used the following criteria to consider the expression of a gene up- or down-regulated by bortezomib treatment: the difference of the DCp values between the bortezomib plate and the mean of the six control plates had to exceed ±3 SD. We obtained considerably different groups of regulated genes by using the two different normalization factors (Table 1). These results further emphasize the role of normalization, evaluating moderate changes in gene expression: normalization with the optimal five housekeeping gene resulted in up-regulation of only one of the autophagy-related genes of the panel, while all three became modulated by normalizing with the seven most stable genes (italicized in Table 1). However, the majority of the regulated genes are common for the two normalizations. Representative genes with significant changes in DCp values are plotted in Figure 5. 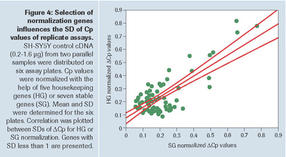 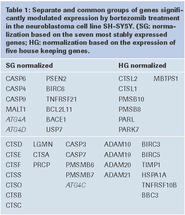 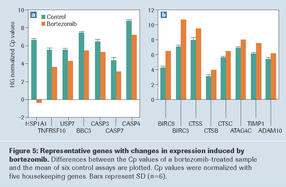 The UPL-based RealTime ready Protease Custom Panel is a reproducible assay system for investigating moderate changes of gene expression. However, the method of normalization can be crucial for determining these changes. After bortezomib treatment we found up-regulation of the expression of protease components (and possible other components as well). Autophagy was expected to be up-regulated by bortezomib treatment, however, most of the lyosomal proteases were down-regulated after exposure to bortezomib except for cathepsin D and L1. It was unexcepted that several caspase genes (executive caspases) were significantly up-regulated by bortezomib. The considerable number of genes modulated after bortezomib treatment may both contribute to the apoptotic response of neuroblastoma cells and the toxic response to bortezomib in neuronal cells.