Acute myeloid leukemia (AML) is a heterogeneous group of diseases, currently classified by abnormalities in bone marrow morphology, karyotype, acquired gene mutations, and alterations in gene expression. Although the identification of specific gene mutations has resulted in im­proved treatments and outcomes for some AML patients, enormous clinical heterogeneity exists and may reflect the presence of still-undetected initiating and cooperating mutations. Therefore, the discovery of somatic mutations in the genomes of AML patients with normal and abnormal karyotypes will advance the understanding of the genetics underlying AML and should lead to more specific therapies and better patient classification schemes. 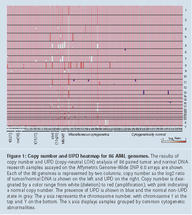 Identification of mutations important for AML pathogenesis will require knowing the complete sequence of a large number of AML genomes. To complement cytogenetic studies and to identify genes altered in AML genomes, Walter and co-workers performed a genome-wide copy number analysis with paired normal and tumor DNA obtained from adults with de novo AML.

Genomic DNA was prepared from unfractionated bone marrow (tumor) and normal tissue (skin biopsy) from 86 individuals with de novo AML. Eligibility criteria included age greater than 18, more than 30% myeloblasts in the bone marrow, and the absence of antecedent chemotherapy, radiation therapy, or history of myelodysplasia. Research samples with two or fewer clonal cytogenetic abnormalities were given preference for inclusion in the study. Paired samples made it possible to distinguish acquired copy number alterations (CNA) from inherited copy number variants (CNV). Cases were classified in accordance with the French-American-British (FAB) system upon diagnosis and banking of their bone marrow specimens. The subjects included FAB M0–M7, with a median blast count of 64% (range, 30–100%).


Genomic DNA was also prepared from unfractionated bone marrow (tumor) and normal tissue (skin biopsy) from an additional 38 subjects with de novo AML to evaluate for recurrence of small copy number alterations discovered in the original 86 AML genomes. All research samples had two or fewer clonal cytogenetic abnormalities, and all specimens were labeled with a randomly generated unique number (UPN). 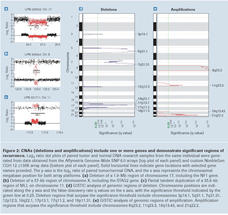 In this study, Walter and co-workers identified 201 acquired CNAs in 86 AML genomes using the SNP arrays (Figure 1). The 201 CNAs occurred in 38 of 86 AML genomes, ranged from 35 kb (34 probes) to 250 Mb (146,524 probes) in size (median, 9.15 Mb), and involved every chromosome at least once. There was a mean of 2.34 CNAs per AML genome (range, 0–30; median, 0), and deletions were more common than amplifications (1.23:1). The 201 CNAs were distributed across all FAB subtypes, with M6 and M7 subtypes containing significantly more CNAs per genome compared with all other subtypes (mean 21 vs. 1.4, respectively; p=0.02). Known cancer- and leukemia-related genes were significantly enriched in the CNA loci, and their mRNA expression levels were often altered, suggesting that these genes may contribute to AML pathogenesis.


The researchers identified 12 chromosomal regions (8 deletions and 4 amplifications) from the 201 CNAs that were significantly altered in multiple AML genomes by using the Genomic Identification of Significant Targets in Cancer (GISTIC) algorithm (Figure 2). Most of these regions contain at least one gene previously implicated in cancer and/or AML/MDS.


All 12 recurrent regions displayed mRNA expression levels for the entire region that were significantly altered in a gene dose-dependent manner, compared with samples without CNAs (p-value range, 0.02–2.06E-16). In addition, 18 recurrent CNA regions were discovered (10 deletions and 8 amplifications, 6 of 18 loci contained within one of the 12 GISTIC-identified loci) in the 201 CNAs that contained a cancer-or AML/MDS-associated gene and involved at least one research sample with a CNA <5 Mb.


There were an additional 32 recurrent CNA regions (19 deletions and 13 amplifications, 6 of 32 loci contained within 1 of the 12 GISTIC-identified loci) that included genes not previously implicated in cancer or AML/MDS and involved at least one research sample with a CNA <5 Mb. The mRNA expression levels of 43 genes, located in 15 of these 32 regions (47%), were significantly altered compared with samples without changes (p-value range, 0.049–8.37E-11).


Favorable, intermediate, and adverse cytogenetic categories at diagnosis, defined by Cancer and Leukemia Group B (CALGB), were predictive of overall and event-free survival in the AML subjects, as expected. However, the total number of CNAs per subject (for all subjects or only individuals with normal cytogenetics), identified by SNP arrays and cytogenetics or by SNP arrays only, was not predictive of overall or event-free survival, independent of cytogenetic classification.

Of the 201 CNAs detected in the 86 genomes, 21 (10%) encompassed £3 genes (all <1 Mb). Of these 21 segments, six (29%) included known cancer-associated genes. Three of the 21 CNAs contained no known genes but did include regions of high sequence conservation (>75%) across chimp, rhesus, horse, dog, and mouse genomes.


Identification of translocations and gene
mutations

There were 23 cytogenetically defined, balanced rearrangements that occurred in >25% of metaphases in 22 subjects with noncomplex karyotypes. The researchers detected regions of CNA at the breakpoints of subjects with cytogenetically defined balanced rearrangements as well as a deletion end point located at a common translocation breakpoint in the NUP98 gene on chromosome 11p15.5. However, no cytogenetic translocations were detected in this individual.

The researchers identified eight regions of UPD in seven of 86 research samples. UPD occurred more often in cytogenetically normal AML genomes (15% vs. 3.8%; p=0.08). All regions of UPD extended to the end of the affected chromosome and varied in size from 11 to 95 Mb.


Twenty-four percent of AML subjects with normal cytogenetics had CNA, whereas 40% of individuals with an abnormal karyotype had additional CNA detected by SNP array, and several CNA regions were recurrent. The mRNA expression levels of 57 genes were significantly altered in 27 of 50 recurrent CNA regions <5 Mb. A total of eight uniparental disomy (UPD) segments were identified in the 86 genomes; six of eight UPD calls occurred in research samples with a normal karyotype. Collectively, 34 of 86 AML genomes (40%) contained alterations not found with cytogenetics, and 98% of these regions contained genes. Of 86 genomes, 43 (50%) had no CNA or UPD at this level of resolution.

full-screen
To complement cytogenetic studies and to identify genes altered in AML genomes, Walter and co-workers performed a genome-wide copy number analysis with paired normal and tumor DNA obtained from 86 adult subjects with de novo AML using 1.85 million feature SNP arrays. A total of 201 somatic CNAs were found in the 86 AML genomes (mean, 2.34 CNAs per genome), with FAB-System M6 and M7 genomes containing the most changes (10-29 CNAs per genome). According to the authors' conclusions, the use of an unbiased high-resolution genomic screen identified many genes not previously implicated in AML that may be relevant for pathogenesis, along with many known oncogenes and tumor suppressor genes. Despite the ability of next-generation sequencing platforms to accurately identify amplifications, deletions, and translocations, a multiplatform approach (traditional cytogenetics, FISH, SNP array, array CGH, and targeted gene resequencing) will continue to be the most practical approach to studying AML genomes at most institutions for the time being. Using this multiplatform approach (karyotype, SNP array, array CGH, and gene resequencing), Walter et al. found at least one genetic abnormality in 95% (82 of 86) of the AML genomes, including many known and SNP array-specific CNAs (Figure 3).