The power of the Genome Sequencer FLX System and its utility for sequencing amplicons derive from the ability to sequence from single molecules within a mixture of molecules. In this process, each amplicon molecule, also known as a PCR product, is sequenced individually, allowing for the identification of rare variants and the assignment of haplotype information over the full sequence length. The Genome Sequencer FLX System provides “instant” cloning of hundreds of thousands of molecules via an emulsion PCR step. This is a sharp contrast to the Sanger method of direct PCR-product sequencing, which results in a sequence read that is an average of all the molecules in the mixture.

The recent introduction of the GS FLX Titanium Series amplicon sequencing kits and protocols enables an increasing number of research applications in diverse fields of biology (Figure 1). The extended read lengths (400-500 base amplicons) improve targeted resequencing by more completely covering the loci with fewer amplicons and enhancing sensitivity for identifying rare variants and haplotypes. The Amplicon Variant Analysis software supplied with the system automatically computes the alignment of reads from amplicon-based samples against a reference sequence. The complete system enables:

Each of these studies can be categorized under three primary amplicon methods: ultra-deep, ultra-broad, and 16S rRNA sequencing. 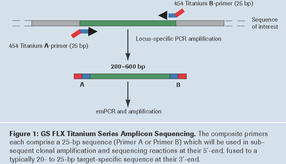 
A number of recent research studies have employed ultra-deep sequencing with the Genome Sequencer FLX System to detect low-frequency HIV drug-resistant mutations. One such study was a blinded, retrospective analysis of 258 research samples taken from HIV-infected individuals before drug treatment was initiated [1]. The results showed that the fraction of subjects harboring resistance variants was approximately twice as high as previously determined using traditional laboratory tests. The researchers also found that NNRTI (non-nucleoside reverse transcriptase inhibitor) drug resistance mutations present in as little as 1% of the viral population could lead to early antiretroviral treatment failure with statistical significance. The tremendous sensitivity of the sequencing system enabled the researchers to detect these rare mutations. A similar research study used ultra-deep sequencing with the Genome Sequencer FLX System to uncover low-frequency hepatitis B drug-resistant viral variants and potential vaccine-escape mutants and found improved sensitivity compared with traditional methods [2].


Other research studies have used ultra-deep sequencing to identify rare somatic mutations in complex cancer samples. In one example, researchers used ultra-deep sequencing to investigate intraclonal diversification in the Ig heavy-chain locus in 22 individuals with B-cell chronic lymphocytic leukemia (CLL) [3]. Using this method they were able to improve sensitivity for detecting rare variants to 1 in 5,000 copies, compared with 1 in 100 copies with previously published methods. Given the number and high turnover rate of circulating CLL cells, the researchers hypothesize that even extremely rare variants have significant leukemogenic potential and that ultra-deep sequencing is an effective method for studying the clonal evolution of these cancer cells.


Ultra-broad sequencing with the Genome Sequencer FLX System was employed in a recent study to explore the molecular basis of hereditary disease and cancer [4]. The researchers sequenced pooled PCR products from human samples belonging to disease-associated genes in search of novel sequence variants and known variants previously identified by Sanger sequencing. The results showed that the system enabled high sensitivity sequencing at 30x coverage with only 0.05% false-positive calls. The method was particularly effective at detecting SNPs (98.5% for top confidence calls), and false-negatives relative to known variations were not present. Given these results, the investigators state that the system may eventually be applicable to molecular diagnostic applications in the future and encourage future studies to evaluate the simplicity, speed, and quality compared with traditional methods.

Targeted amplicon sequencing of the 16S rRNA gene is a common method for studying bacterial phylogeny and taxonomy, particularly in diverse metagenomic samples. This method has been used to explore bacterial diversity in a number of environments, from the deep waters of the Northern Pacific ocean, to chronic wounds and human saliva.

In one study, researchers used 16S rRNA amplicon sequencing to characterize microbial communities in the human guts of lean and obese twins [5]. The human body harbors trillions of diverse microbial organisms which collectively form a community, or “microbiome”. The body is dependent upon interactions with these microbial organisms for a variety of known functions, including nutrient digestion and immune defense. In this study, the investigators found that individuals from the same family had more similar bacterial communities than unrelated individuals. However, the immense microbial diversity found across all individuals forced them to re-think their hypothesis of a “core microbiome” based on the relative abundance of bacterial families. Instead, common functional categories of genes and metabolic pathways were consistently found across all research samples, implying that a variety of bacterial species can perform the same metabolic functions. When comparing gut communities across lean and obese twins, the study revealed significant differences in genes associated with nutrient metabolism. These results serve as a starting point for further comparative analysis of gut microbiota in individuals with intentional weight gain or loss.

Amplicon sequencing with the Genome Sequencer FLX System has already enabled a wide variety of scientific discoveries, particularly in clinical research. The introduction of the GS FLX Titanium Chemistry and the release of the associated amplicon sequencing protocols will continue to expand applications, as more and longer amplicons increase the depth of analysis for detecting rare variants and improve coverage of gene loci.