Transfected cell microarray is a miniaturization of cell-based functional studies and allows spatially restricted transfection without the use of wells [1]. Expression plasmids and/or siRNAs complexed with a transfection reagent in a gel are printed on a glass slide. Cells growing on top of such printed spots will take up the nucleic acids deposited in the spot, while cells growing between the spots will not be transfected, resulting in overexpression or silencing of specific gene products in groups of living cells. By applying appropriate assays, phenotypic consequences of the gene perturbations can be detected (e.g., genes involved in signal transduction and transcriptional regulation, apoptosis and subcellular localization can be identified) (Figure 1). The transfected cell microarray format has enormous possibilities when it comes to both high-throughput screening and more medium-scale functional studies. We have optimized the method for medium-scale functional studies with expression plasmids and ­siRNAs using X-tremeGENE siRNA Transfection Reagent [2]. Here we describe technical considerations of the method and show some examples of possible biological readouts.

The printing solution was optimized as described in the results and applications section, and the following composition gave high transfection efficiency and well-localized spots in HEK 293 cells: In a 1.5-ml microcentrifuge tube, plasmid (1 µg/µl) and siRNA were mixed with growth medium without fetal calf serum (FCS), 0.5 µl 1.5 M sucrose, and 3 µl X-tremeGENE siRNA Transfection Reagent per microgram nucleic acid to a final volume of 22.5 µl. After 15-20 minutes of incubation, 7.5 µl 0.4% gelatine (Type B, G9391, Sigma) was added to give 30 µl printing solution. 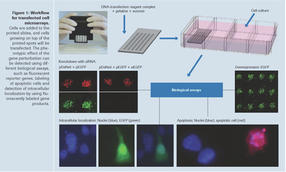 Immediately prior to transfection, actively growing cells were trypsinized and resuspended in growth medium to desired density. The printed slides were placed in QuadriPERM plates (Vivascience) and overlaid with 3 x 106 cells in 8 ml medium. After 48 hours of incubation, the slides were gently washed in PBS, and the cells were fixed (3.7% paraformaldehyde and 4% sucrose in PBS) for 20 minutes at room temperature. After the slides had been washed, the nuclei were stained with DAPI (Invitrogen) and the slides mounted with Mowiol 4-88 (Hoechst).

Our protocol [2] is based on the so-called lipid-DNA method reported by Ziauddin and Sabatini [1]. The work-flow includes making the printing solution, printing the arrays, incubating cells on the top of the arrays, and detecting the resulting effects in the spots. 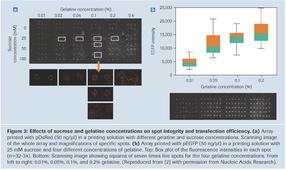 For detecting the phenotypic effects of gene perturbations, a huge range of different biological readouts is possible. We have shown the potential of transfected cell microarrays for studying complex regulation of gene expression by enabling measurement of biological responses in cells with overexpression and downregulation of specific gene products, combined with the possibility of assaying the effects of external stimuli using fluorescent reporter genes as readouts [2]. Transfected cell microarrays can also be used to detect phenotypes such as apoptosis and intracellular localization (Figure 1).

Transfected cell microarray is a versatile, efficient, and cost-reducing technology [1,3,4] that can contribute to further understanding of gene functions and regulatory mechanisms governing gene expression. We have optimized the protocol of transfected cell microarrays using X-tremeGENE siRNA Transfection Reagent to transfect both expression plasmids and siRNAs, and have shown that this technology can be used to reliably detect even quantitatively minor biological effects of gene perturbations by including several technical and experimental replicates and using linear regression (ANOVA) modeling to estimate the biological effects [2].