To understand overall infectivity, virus progression and disease onset it is important to perform a detailed examination of cytopathic effects. Depending on the type of viruses and cells, different cytopathic effects might be observed dependent on the timepoint of infection (e.g., during the growth or stationary phase) and the amount of virus used.

One of the most common methods for measuring lysogenic/lytic activity of viruses is the plaque test [1]. In this assay culture plates with confluent cells that are sensitive towards the specific virus type/strain are used. Lytic activity of a virus is detected by macroscopic analysis of plaques in a confluent cell layer after staining (e.g., with crystal violet). This technique is an end-point assay and it is well-suited to determine viral titers; however, it provides no information about the onset of cytopathic effects and kinetics of the viral replication. Moreover, infection with a number of viruses (e.g., attenuated mutants) leads to the formation of small and/or turbid plaques, which are difficult to detect properly, or even leads to no plaque formation at all, although the virus replicates successfully.

The new xCELLigence System, based on microelectronic biosensor technology, allows dynamic, real-time label-free and non-invasive analysis of cellular events [2] such as viral cytopathogenicity. The system is based on the measurement of electronic impedance. When adherent cells attach to the sensor surface of electrode arrays, the changes of impedance in the interconnection of cells and electrodes will be detected and monitored. The electrodes are integrated into the bottom of the wells of a special cell culture plate (called E-Plate 96) thus allowing experiments in the standard 96-well format. By this means, the system allows the monitoring of changes in cell characteristics such as cell numbers, strength of adherence, cell viability, cell morphology, and cell motility. In this way, this system may fulfill the needs in addressing various questions within a broad spectrum of research fields, such as drug development, toxicology, cancer biology, medical microbiology, and virology [2]. The technology has been used for proliferation and cytotoxicity assays [2], cell adhesion, and spreading [3], cell culture quality control [4], receptor tyrosine kinase activation [5], mast cell activation [6], and G protein-coupled receptor (GPCR) activation [7].

The xCELLigence System comprises several components, the RTCA Single Plate (SP) Station, the RTCA Analyzer and the RTCA Control Unit with integrated software. The RTCA SP Station fits inside a standard cell culture incubator, thus ensuring a temperature-, humidity-, and CO2-controlled environment throughout each experiment. RTCA SP Station accommodates one E-Plate 96. The bottom of each well of an E-Plate 96 contains the sensor electrode arrays. The measured electrode impedance is expressed as dimension-less Cell Index (CI) value and is used to graphically present phenotypic changes of a cell population over time in a software-assisted manner.

Cells used in this study were cultured in a standard humidified incubator at 37°C with 5% CO2 saturation. Vero E6 (obtained from the ATCC) is an African green monkey kidney-derived cell line with deficiency of the type-1 interferon genes. HEK 293 (Microbix Biosystems) is a human embryonic kidney cell line with an intact interferon system.

First, 100 µl of growth medium was added to the wells of the E-Plate 96 to obtain background readings; then 100 µl of cell suspension was added containing the respective number of cells. For each cell type, a sequential 1:1 dilution series with 7 different cell numbers ranging from 50,000 to 781 cells/well were resuspended in 100 µl of medium and seeded in an E-Plate 96. The E-Plates containing the cells were incubated for 30 minutes at room temperature, then placed on the RTCA SP Station in the incubator. The attachment, spreading, and proliferation of the cells was monitored every 30 minutes using the RTCA SP Instrument. Measured impedance of individual wells was automatically converted to cell index (CI) values.

In order to identify the optimal time point for infection, a cell proliferation analysis was performed with Vero E6 and HEK 293 cells (Figure 1). 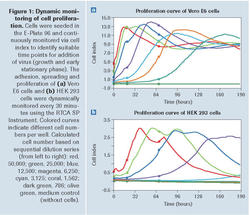 Suitable time points for virus infection were defined at 20.5 hours for Vero E6 cells and 68.5 hours for HEK 293 cells. Depending on the number of cells seeded, viral cytopathogenicity was monitored in either the growth phase or the following early stationary phase.

Based on the dynamic monitoring of cell proliferation, 12,500 cells (growth phase) and 25,000 Vero E6 cells (early stationary phase) were infected with VSV after 20.5 hours (Figure 2). 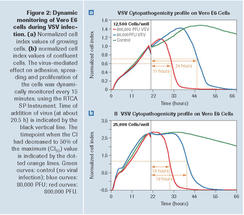 When Vero E6 cells were infected with VSV during the growth phase, there was a clear correlation between the amount of virus used for infection and the onset of the virus-mediated cytopathic effect. Following infection with a low MOI the cells continued to grow for 15 hours (Figure 2a, blue curve) similar to mock-infected cells (Figure 2a, green curve). Then the CI started to decline, indicating that the cells started dying as a consequence of VSV replication, whereas mock-infected cells continued to grow. At 24 hours after infection the CI had dropped to 50% of the maximum value (CI50) and it continued to decline until a final CI of 0 was reached, indicating complete cell death in the infected culture. In contrast, the CI of Vero E6 cells infected with a high MOI started to decline already at 4 hours post infection (Figure 2a, red curve) and the CI50 was already reached after 11 hours. Again, the final CI was 0, indicating complete cell death in the infected cultures. Very similar results were obtained when confluent Vero E6 cells were infected (Figure 2b). The CI50 was reached at 10 hours post infection (high MOI, Figure 2b, red curve) and 19 hours post infection (low MOI, Figure 2b, blue curve) and complete death of the infected cultures was observed. 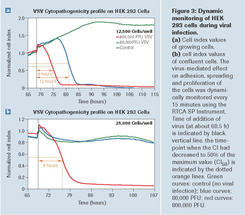 Concerning their response to viral infections, the main difference between Vero E6 and HEK 293 cells is their ability to produce type-1 interferons. Vero E6 cells are devoid of the interferon genes [8]. As a consequence, they cannot upregulate the expression of interferon-induced antiviral active proteins like MxA and OAS/RNaseL in response to viral infections. In contrast, HEK 293 cells possess an intact interferon system. Upon viral infection they produce interferons, which activate the JAK/STAT signaling pathway in an autocrine and paracrine manner. As a consequence, the expression of antiviral active proteins is initiated and an antiviral state is established.

It is therefore tempting to speculate that the observed resistance of confluent HEK 293 cells to VSV infection with a low MOI can be attributed to the anti­viral response mounted by the interferon system. Additionally, confluent cells might represent a suboptimal environment for VSV replication, since it is well-known that those cells have a reduced metabolic activity compared with growing cells. In line with this hypothesis is the observation that growing HEK 293 cells are very sensitive to VSV, independent of the MOI used for infection. On the other hand, it should also be noted that the VSV-M protein counteracts the interferon system by general inhibition of host RNA and protein synthesis and contributes to the shutoff of host-directed gene expression [9]. Therefore, the observed differences in response to VSV infection and their dependency on cell number and MOI probably reflect the interplay of the cellular antiviral system and the viral countermeasures. In contrast to conventional end-point assays, the xCELLigence System offers the possibility to observe these virus-host interactions, and to define conditions where either the viral or the cellular part becomes dominant.