Chromatin regulating complexes, and most notably the family of Polycomb repressive complexes (PRCs), which mediate trimethylation at H3K27, are highly active in cancer cells. However, the current evidence left many questions open as to the nature of the interaction between DNA methylation and the Polycomb systems.

A systematic approach was developed to characterize the combined epigenetic states of a carefully chosen set of 1,800 promoters in primary prostate epithelial cells (PrEC) and the PC3 prostate cancer cell line. A balanced groups of promoters were selected, having high and low CpG content and four PC3/PrEC expression profiles: PC3 repressed, constitutive inactive, constitutive active, and PC3 induced. Regions surrounding these promoters [2.5 kb upstream and 1 kb downstream of their annotated transcription start site (TSS)] were tiled on a high-density array at a 20-bp resolution. Additional half-megabase contiguous regions around the HOXA and ApoB clusters were included for additional control.

An enhanced technique was developed for DNA methylation profiling by combining 5-methylcytosine immunoprecipitation [MeDIP] of target DNA and DNA that was treated with M.SssI to full methylation. The M.SssI data provided the authors with calibration for the experimental readout at regions with different G + C contents and for the saturation of enrichment at CpG-dense loci. Combined with a new computational normalization scheme, this approach allowed accurate and carefully controlled quantification of DNA methylation levels at high resolution.

MeDIP was performed with 10 µg of sonicated genomic DNA (100–400 bp in length) which was denatured, incubated O/N at 4°C with 20 µg of anti-methyl cytosine antibody, and subsequently with 60 µl of protein A/G beads for 2 hours at 4°C. The beads were washed and incubated with digestion buffer and proteinase K for 3 hours and the DNA extracted by phenol-chloroform and ethanol precipitation. For array experiments, the output from 3 MeDIP reactions was combined (total of 30 µg starting DNA) to constitute one replicate to eliminate the need for whole-genome amplification. The sonicated DNA served as input. MeDIP arrays were done in triplicates.

For the M.SssI controls, human genomic DNA was treated with M.SssI (4 units per 1 µg DNA) for 4 hours prior to sonication and immunoprecipitation as described above. The output of 2 MeDIP reactions performed on M.SssI-treated DNA (total of 20 µg starting DNA) was combined to constitute one replicate. Sonicated M.SssI-treated DNA served as the input. Labeling and hybridization to our custom array was performed by Roche. 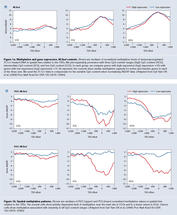 The quantitative DNA methylation profiles were combined with high-resolution data on occupancy of a PRC component (SUZ12) and the PRC histone mark H3K27me3 in the two cell types, and the integrated profile was dissected by a new algorithm. The use of a single experimental platform to probe the distributions of several epigenetic marks was crucial to the interpretation of the data. Using this experimental design, the improved DNA methylation profiling method, and the integrated experimental and analytical strategy, we were able to comprehensively characterize the epigenetic reprogramming that differentiates normal prostate epithelial cells from the PC3 cancer line. 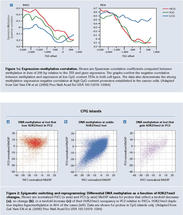 The authors first studied the correlation between gene expression and spatial patterns of DNA methylation. Methylation in promoters was compared with different CpG contents, using the M.SssI-treated controls as a baseline that reflects full potential methylation. As depicted in Figure 1a, an activity-dependent depletion of methylation around the TSS for promoters with low CpG content (LCG) in both cell types was observed, as well as activity-dependent depletion of methylation  (Figure 1b) around the TSS for promoters with low CpG content (LCG) in both cell types. Following a similar trend, active promoters with intermediate (ICG) and high (HCG) CpG content, were unmethylated in both PC3 and PrEC. However, while inactive HCG promoters in normal cells were also generally unmethylated, PC3 cells exhibited almost complete methylation at these promoters (79% of the probes at CpG islands of low-expression genes have PC3 normalized MeDIP values > -5.) Thus, these cells have almost fully methylated all of their inactive promoters, both those that were inactive already in PrEC cells and those that were de novo repressed. Such hypermethylation was observed regardless of the genes’ CpG content and in contrast to normal cells, in which high CpG content promoters are unmethylated. A significant negative correlation between methylation and expression was observed in both cell types for low CpG-content promoters [PrEC, P < 10-8; PC3, P < 3 x 10-4 (Spearman)] (Figure 1c).

As concluded, low-density DNA methylation around the TSS infrequently co-occurs with PolII occupancy and/or active transcription. Additional observations on hyper- and hypomethylation at the HOX clusters suggest that epigenetic reprogramming can span regions beyond a single gene.

PRC2 and DNA methylation are switched in PC3 cells

Following these studies, the levels of three Polycomb-related proteins (H3K27me3 and the PRC2 components SUZ12 and EZH2) in a line of reference germ cell tumor (NCCIT) and the prostate cells were examined. The overall abundances of both PRC2 components and the H3K27me3 mark were substantially higher in NCCIT and PC3 cells relative to the normal cells. Then the array was used to study the distributions of H3K27me3 and SUZ12 occupancy and compare them with the DNA methylation profiles. Somewhat unexpectedly, in cases of both decreased and increased PRC, occupancy on the array was detected, even though the Polycomb system was globally more active in PC3. Remarkably, the data showed sweeping DNA hypermethylation at almost all loci that lose H3K27me3 in PC3 cells relative to PrECs (Figure 2). Eighty-eight percent of the loci with at least a two-fold decrease in H3K27me3 marks are methylated in PC3 (methylation ≥5 units), compared with only 26% of the loci without observed change in H3K27me3 levels.

Systematic characterization of switching and reprogramming in PC3 cells

The remarkable correlation between reprogramming of DNA methylation and H3K27me3 in PC3 cells can be summarized into three patterns or modes. First, loci that lose H3K27me3 marks gain DNA methylation (epigenetic switching). Second, additional DNA hypermethylation is observed without change in H3K27me3 (5mC reprogramming). Finally, de novo H3K27me3 is observed without change in DNA methylation (PRC reprogramming). The authors conclude that on a large scale, the epigenetic differences between PrECs and PC3 are accounted for by three regimes of correlated and independent changes in DNA hypermethylation and H3K27me3 levels. Additional trends such as DNA hypomethylation can also be observed, but the presented data reflect more localized and specific cases.

A key observation in these presented results was the magnitude of hypermethylation in PC3 cells, which occurred at almost all of the inactive CpG island genes. A second key observation was that when PRC marks were depleted, a PC3 hypermethylation was observed. One possible model that can explain these observations assumes that DNA methylation in PC3 cells sweeps all CpGs that are not physically protected (or “masked”) (Figure 3). According to this “passive” methylation model, transcription initiation complexes at the TSS [RNA PolII and related chromatin marks, can serve as one masking mechanism (Figure 3a), and Polycomb repressive complexes can serve as another (Figure 3b). This view was also supported by recent data on DNA methylation patterns of mouse ESCs. It is important to note that even if Polycomb complexes mask loci from de novo DNA methylation, it is possible that PRC activity (or recruitment) is not masked by DNA methylation (Figure 3c). This may be the case in some of the de novo PRC targets we observe near genes that are repressed in PC3. 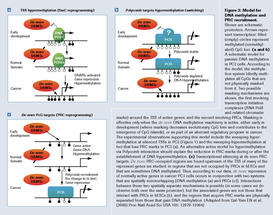 Regardless of the underlying mechanism, the data outline a fundamental change in the epigenetic programming of PC3 cells, in which many genes that are originally silenced by PRCs acquire DNA methylation as an alternative silencing mechanism, and other genes are de novo repressed by Polycomb recruitment, in agreement with another recent study. If the PC3 regulatory program has stem cell features, these must be achieved through a variation on the normal epigenetic mechanisms for immortality and pluripotency, a variation that may be critically less flexible.

The applicability of these observations to prostate tumors and cancer cells in general should be further investigated. Even though there are limitations to the use of short-term cultures of epithelial cells for these studies, they at least represent a relatively homogeneous population of the normal cell counterpart of PC3 cells. The results of the study stress the importance of an integrative approach for the characterization of the cancer epigenome and demonstrate the benefits of using a coherent experimental system to map multiple epigenetic factors. According to Gal-Yam et al., it will be intriguing to apply the methodology developed here to additional cell systems and epigenetic marks and to use a more extensive genomic coverage to uncover additional processes that contribute to the epigenetic reprogramming of cancer cells.

This article was summarized for BIOCHEMICA from