For the in vitro testing of pharmaceutical, cosmetic and chemical products conventional cell cultures are increasingly being replaced by three-dimensional (3D) cell culture models with organ-specific characteristics. Using tissue engineering techniques, a living human skin equivalent has been developed at the Fraunhofer IGB which mimics the normal human skin.

The fabrication of the 3D skin model requires the isolation and growth of primary keratinocytes and fibroblasts from human skin tissue. For the isolation of the cells it is necessary to dissociate the skin tissue in the dermal and epidermal layer without destroying the cells. Usually, cell isolation is performed in a two-step protocol. Following dissociation of both layers with dispase, collagenases are used to release the fibroblasts from the dermis.

The goal of all cell isolation procedures is to maximize the yield of dissociated cells that are viable and functionally active. Liberase second-generation products are mixtures of collagenases and neutral protease enzymes, formulated for efficient dissociation of tissue from a wide variety of sources. The purified collagenase enzymes are isoforms I and II, as specified by the nomenclature of Bond and Van Wart [1]. The neutral protease dispase from Bacillus polymyxa has been proven to effectively separate intact epidermis from the dermal layer [2]. Therefore, liberase enzyme blends containing dispase were investigated.

Compared with the former liberase products, the second-generation Liberase Research Grade products are composed of highly pure grades of enzymes as a result of advanced fermentation conditions and an optimized purification process leading to intact, non-degraded raw material [3]. In the following, Liberase Blendzyme 1 is compared with its new successor Liberase DL Research Grade in terms of cell number, viability and functionality.

Cells were isolated from human foreskin tissue using a standard dissociation protocol established at Fraunhofer IGB, which was adapted to the one-step enzyme incubation procedure using first-generation Liberase Blendzyme 1 (BL1) and a preproduction test lot of the second-generation Liberase DH Research Grade (Dispase High). Both products are a mixture of dispase and collagenase I and  II and exhibit the same collagenase activity of 14 U/ml (Wünsch) and the same dispase activity. Briefly, the epidermis was mechanically separated from the dermis following enzymatic treatment for 150 minutes at 37°C with BL1 or DH, respectively. The working solutions of both enzymes exhibited a collagenase activity of 2.4 U/ml. Further digestion of the isolated epidermis was performed with 0.25% trypsin/EDTA for 18 minutes at 37°C to release the cells. Cell number and viability of the collected cells were determined with a hemocytometer using trypan blue staining. The keratinocytes were then expanded in monolayer culture for one passage in KBM2 medium.

Human dermal fibroblasts were obtained from explant cultures of the de-epidermized dermis. The cells were cultured in DMEM supplemented with 10% fetal calf serum (FCS).

Both cell types were used to establish the 3D skin equivalent consisting of a dermal and an epidermal layer, generated according to a protocol established at Fraunhofer IGB (EP 1 290 145B1).

For the construction of the dermal part fibroblasts were embedded into a collagen type I hydrogel and submersed in DMEM supplemented with 10% FCS. The next day the keratinocytes were seeded on top and allowed to settle for 45 minutes before being submerged in KBM2 supplemented with 5% FCS. After submersed incubation for 7 days with decreasing FCS concentrations the medium level was lowered to the base of the dermal layer, thus exposing the culture surface to the air-liquid interface. In this culture phase a differentiation medium with a final calcium concentration of 1.8 mM was used and the cultivation was continued with medium changes every 3 days up to day 12.

During this two-week culture period in special growth media and culture conditions, keratinocytes undergo a functional differentiation to a multilayer epidermis with a closing stratum corneum. The structure of the epidermal layer was evaluated with histological hematoxylin-eosin staining (H&E) to give evidence about the functionality of the isolated keratinocytes. Furthermore, the cell-specific protein expression was assessed with immunohistological staining against cytokeratin 10.

Every experiment was repeated three times with triplicates analyzed per time point.

The tissue displayed a soft and digested appearance after the incubation with Liberase Blendzyme 1 or with Liberase DH Research Grade, resulting from the partial digestion of the dermis by the collagenase activity of both products. Although discrimination between the epidermal and dermal layer was difficult, for both the separation of the two layers was possible. The number of isolated keratinocytes is shown in Figure 1a. Because of the significant variations in cell numbers of each single experiment, no mean was calculated. In two of three experiments incubation with Liberase Blendzyme 1 resulted in a higher cell yield compared with Liberase DH Research Grade. The viability of the isolated cells was comparable for both enzymes (Figure 1b). 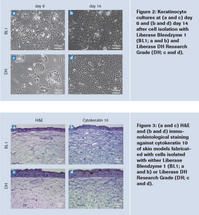 The morphology of isolated keratinocytes in primary culture is shown in Figure 2. At day 6, cultures obtained from both enzyme incubations were contaminated with fibroblasts and endothelial cells (Figure 2a and c). This was attributed to the collagenase activity of both products, leading to a partial digestion of the dermis and with that the release of dermal cells. However, at day 14 only scattered fibroblasts were observed (Figure 2b and d). The fibroblasts were easily removed from the cultures by a short incubation with trypsin. The keratinocytes showed the typical morphology of basal keratinocytes and were highly proliferative. Particularly keratinocytes isolated with DH displayed a smaller cell diameter, indicative of an undifferentiated cell phenotype.

The isolated fibroblasts from the dermis showed a high proliferative activity reaching confluence at day 8 of primary culture; this was similar for both Liberase enzyme blends.

The functionality of the isolated keratinocytes was demonstrated by the development of a multilayered epidermis with a stratified closing layer. Using cells isolated with Liberase Blendzyme 1, the epidermal layer consisted of two to three cell layers (Figure 3a). In contrast, with the use of Liberase DH Research Grade the keratinocytes developed a three- to four-layer epidermis (Figure 3c). The early epidermal differentiation marker cytokeratin 10 was expressed at a higher level in skin equivalents fabricated with Liberase DH Research Grade (DH, Figure 3d) than in those fabricated with Liberase Blendzyme 1 (BL1, Figure 3b).

The three-enzyme composition of Liberase products might be further beneficial for the efficient dissociation of other tissues, e.g. tumor samples.