Transfection is a method for delivering nucleic acids, either DNA or RNA, into animal cells in vitro. In applications such as protein production, the main purpose is to produce protein; consequently any effects on endogenous gene expression are generally irrelevant, unless the changes relate directly to loss of the cell’s ability to produce protein, i.e., cell death. In contrast, in applications where the biochemical pathways are of interest, changes within the cell can alter the interpretation of the data. Unintended up- or down-regulation of genes within transfected cells is termed an off-target effect. This may be caused by the reagent itself, the vector, or the process of transfection. Such effects, if not carefully evaluated, may lead to misinterpretation of the transfection results and to misleading conclusions. Critically important in transfection experiments is the selection of the appropriate control. Commonly used controls are untransfected cells, cells transfected with a different gene, or cells transfected with a vector that does not contain the gene of interest. The results from the transfected cells are then often normalized to one of the controls. Each type of control will give a different impression of the biologic response. Rarely do controls include transfection with a different transfection reagent.

The studies reported here expand earlier studies which compared the differential expression of transcripts following  transfection by either the FuGENE® 6 [1] or FuGENE® HD [2, 3] Transfection Reagents to another reagent on the market using either a different gene or a vector that did not contain the gene of interest. The studies indicated that the vector used can have an effect, but that it was the choice of transfection reagent that had the greatest impact on the number of transcripts differentially expressed following transfection.  In the study reported here, we limited experiments to one cell line, the human breast cancer cell line, MCF7. We increased the number of transfection reagents tested, looked at the effect of plating cell density, and measured effects on the transcriptome at earlier time points.

Cell lines and transfection. Optimization experiments were performed for each transfection reagent according to manufacturer’s instructions, prior to selecting the amount of transfection reagent to be used for the microarray experiments. A commonly used reporter gene was transfected into cells, the pM1-SEAP vector containing the Secreted Alkaline Phosphatase (SEAP) gene. Briefly, after overnight incubation, MCF7 (ATCC® HTB-22TM) cells plated in 6-well plates at either 200,000 or 400,000 cells per well, were transfected using the optimized amounts for each transfection reagent. Four separate experiments were conducted to provide sufficient samples for microarray analysis. FuGENE® HD Transfection Reagent was tested in all experiments, while reagents from other vendors (Reagent L, Reagent L2K, Reagent LX, Reagent LXP, Reagent LT-1, and Reagent E) were not used in each experiment. These reagents were tested in at least two separate experiments, unless otherwise noted.

Quantification of transfection efficiency.  At two time points post transfection (24 and 48 hours), supernatant from the cells was diluted (1:400) and measured for SEAP activity, according to the protocol for the chemiluminescent SEAP Reporter Gene Assay Kit (Cat No. 11 779 842 001).

Quantification of differentially expressed transcripts. At three time points post transfection (8, 24 and 48 hours), cells were harvested and further processed at Cogenics, a Division of Clinical Data. The Affymetrix Human HG-U133 Plus 2.0 microarray was used, which interrogates over 47,000 transcripts from approximately 38,500 genes to provide broad coverage of the human genome. Transcript levels in transfected cultures were compared with those in untransfected control cells to quantify the number of differentially expressed transcripts for each time and reagent. The data from the four transfection experiments were combined for gene expression profiling data analysis, as previously described [4].

In experiments using SEAP as a reporter gene, expression is generally measured 48 to 72 hours post transfection. SEAP is a secreted protein which is generally non-harmful to the cells, and its level can increase in the medium without deleterious effects. Microscopic examination of cells transfected by some transfection reagents, but not with FuGENE® HD Transfection Reagent, showed morphological changes within the cells at much earlier time points, suggesting that a multitude of changes were occurring within the cells, in addition to the initiation of genes needed to produce SEAP (data not shown).

²   135 transcripts were affected by all four reagents;

²   235 transcripts were affected by three of the reagents, but not altered in cells transfected with the FuGENE® HD Transfection Reagent;

²   10 transcripts were affected by three reagents, including FuGENE® HD Transfection Reagent; the transfection reagent which did not alter their expression is identified;

²       the remainder of the transcripts were differentially expressed in either just one or two of the reagents. 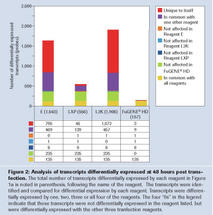 The 135 transcripts differentially expressed by all four reagents (127 up-regulated, and 8 down-regulated), were mapped to 80 genes, and a Gene Ontology enrichment analysis was performed on this set of genes. The ten most enriched categories are identified in Table 1. These categories are very similar to the categories affected by an identical control vector construct that did not contain the SEAP gene [4], suggesting that the vector backbone may be responsible for some of the differentially expressed transcripts.

Additional analysis of the 235 transcripts affected by three of the four reagents (Figure 2, green bar) showed that several
genes of the categories were further affected by these reagents. For example, eight of the 11 genes in the "Antigen Processing and Presentation of Peptide Antigen via MHC class I" category were affected by E, LXP, and L2K, while only five were affected by FuGENE® HD Transfection Reagent [4]. Additional effects on this pathway at the individual reagent level (Figure 2, purple/red bars) were not determined. These findings clearly demonstrate that the other reagents tested cause considerably more effects on cellular processes than FuGENE® HD Transfection Reagent. 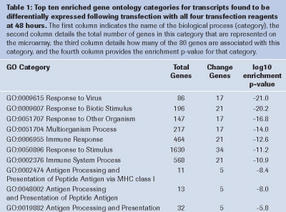 FuGENE® HD Transfection Reagent is very gentle on cells. Previous experiments showed that with some cell lines, higher total protein expression (on a per well basis) was found when cells were plated at a lower density prior to transfection (data not shown). One experiment was done to determine the effect a lower cell density at the time of transfection would have on the transcriptome. As shown in Figure 4, the four reagents did not show a consistent relationship between cell density and either total expression or number of differentially expressed transcripts. However, FuGENE® HD Transfection Reagent resulted in the highest protein expression with the fewest numbers of transcripts differentially expressed at either density.

Effect of other transfection reagents

Researchers interested in pathway analysis, cellular physiology, target validation, or gene regulation use transfection controls to make sure that the answers they obtain are meaningful, and not artifacts, and thus are the true effects caused by what they are studying. Where deleterious or off-target effects are observed following transfection, it has been suggested that cell physiology must have been significantly altered as a consequence of the high expression of the heterologous gene. We have shown that this is not necessarily the case. High expression with minimum off-target effects is possible using a reagent such as FuGENE® HD Transfection Reagent.

FuGENE is a trademark of Fugent LLC, USA.

The ATCC trademark and trade name and any and all ATCC catalog numbers are trademarks of the American Type Culture Collection.